The Story of Isaac Brock Hero, Defender and Saviour of Upper Canada, 1812 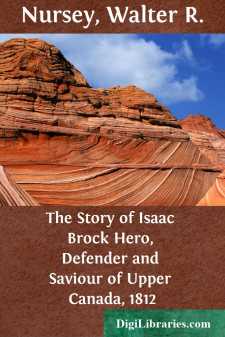 CHAPTER I. OUR HERO'S HOME—GUERNSEY.

Off the coast of Brittany, where the Bay of Biscay fights the white horses of the North Sea, the Island of Guernsey rides at anchor. Its black and yellow, red and purple coast-line, summer and winter, is awash with surf, burying the protecting reefs in a smother of foam. Between these drowned ridges of despair, which warn the toilers of the sea of an intention to engulf them, tongues of ocean pierce the grim chasms of the cliffs.

Between this and the sister island of Alderney the teeth of the Casquets cradle the skeleton of many a stout ship, while above the level of the sea the amethyst peaks of Sark rise like phantom bergs. In the sunlight the rainbow-coloured slopes of Le Gouffre jut upwards a jumble of glory. Exposed to the full fury of an Atlantic gale, these islands are well-nigh obliterated in drench. From where the red gables cluster on the heights of Fort George, which overhang the harbour, to the thickets of Jerbourg, valley and plain, at the time we write of, were a gorgeous carpet of anemones, daffodils, primroses and poppies.

These are tumultuous latitudes. Sudden hurricanes, with the concentrated force of the German Ocean behind them, soon scourge the sea into a whirlpool and extinguish every landmark in a pall of gray. For centuries tumult and action have been other names for the Channel Islands. It is no wonder that the inhabitants partake of the nature of their surroundings. Contact with the elements produces a love for combat. As this little book is largely a record of strife, and of one of Guernsey's greatest fighting sons, it may be well to recall the efforts that preceded the birth of our hero and influenced his career, and through which Guernsey retained its liberties.

For centuries Guernsey had been whipped into strife. From the raid upon her independence by David Bruce, the exiled King of Scotland, early in 1300, on through the centuries up to the seventeenth, piping times of peace were few and far between. The resources of the island led to frequent invasions from France, but while fighting and resistance did not impair the loyalty of the islanders, it nourished a love of freedom, and of hostility to any enemy who had the effrontery to assail it. As a rule the sojourn of these invaders was brief. When sore pressed in a pitched battle on the plateau above St. Peter's Port, the inhabitants would retreat behind the buttresses of Castle Cornet, when, as in the invasion by Charles V. of France, the fortress proving impregnable, the besiegers would collect their belongings and sail away.

In the fourteenth century Henry VI. of England, in consideration of a red rose as annual rental, conveyed the entire group to the Duke of Warwick. But strange privileges were from time to time extended to these audacious people. Queen Elizabeth proclaimed the islands a world's sanctuary, and threw open the ports as free harbours of refuge in time of war. She authorized protection to "a distance on the ocean as far as the eye of man could reach." This act of grace was cancelled by George the Third, who regarded it as a premium on piracy. In Cromwell's time Admiral Blake had been instructed to raise the siege of Castle Cornet. He brought its commander to his senses, but only after nine years of assault, and not before 30,000 cannon-balls had been hurled into the town.

Late in the fourteenth century, when the English were driven out of France, not a few of those deported, who had the fighting propensity well developed, made haste for the Channel Islands, where rare chances offered to handle an arquebus for the King. Among those who sought refuge in Guernsey there landed, not far from the Lion's Rock at Cobo, an English knight, Sir Hugh Brock, lately the keeper of the Castle of Derval in Brittany, a man "stout of figure and valiant of heart." This harbour of refuge was St. Peter's Port.

"Within a long recess there lies a bay, An island shades it from the rolling sea, And forms a port."

The islet that broke the Atlantic rollers was Castle Cornet....