The Story of Glass 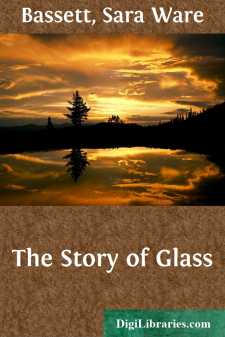 EAN CABOT "lived around." She did not live around because nobody wanted her, however; on the contrary, she lived around because so many people wanted her. Both her father and mother had died when Jean was a baby and so until she was twelve years old she had been brought up by a cousin of her mother's. Then the cousin had married a missionary and had gone to teach the children in China, and China, as you will agree, was no place for an American girl to go to school. Therefore Jean was sent to Boston and put in charge of her uncle, Mr. Robert Cabot. Uncle Bob was delighted with the arrangement, for they were great friends, Jean and this boy-uncle of hers.

But no sooner did she arrive in Boston and settle down to live on Beacon Hill than up rose Uncle Tom Curtis, Jean's other uncle, who lived in Pittsburgh. He made a dreadful fuss because Jean had gone to Uncle Bob's to live. He wanted her out in Pittsburgh, and he wrote that Fräulein Decker, who was his housekeeper, and had been governess to Jean's own mother, wanted her too.

"The very idea," she said, "of that German woman thinking they want Jean in Pittsburgh as much as we want her here in Boston. Didn't I bring up Jean's father, I'd like to know; and her Uncle Bob as well? I guess I can be trusted to bring up another Cabot. It's ridiculous—that's what it is—perfectly ree-diculous!" That was Hannah's favorite expression—"Ree-diculous!" "I'd like my job," went on Hannah, "sending that precious child to Pittsburgh where her white dresses would get all grimed up with coal soot."

But Hannah's scorn of Pittsburgh did not settle the matter.

Instead Mr. Carleton, Uncle Tom Curtis's lawyer, came to Boston as fast as he could get there and one afternoon presented himself at Uncle Bob's house on Beacon Hill. Uncle Bob was in the library when he arrived and the two men sat down before the fire, for it was a chilly day in early spring. After they had said a few pleasant things about the weather, and Uncle Bob had inquired for Uncle Tom, they really got started on what they wanted to say and my—how they did talk! It was all good-natured talk, for Uncle Bob liked Uncle Tom Curtis very much; nevertheless Uncle Bob and Uncle Tom's lawyer did talk pretty hard and pretty fast, for they had lots of things to say.

At last Uncle Bob Cabot rose from his leather chair and going to the fireplace gave the blazing logs a vicious little poke.

He was becoming nettled. Anybody could see that.

"The Curtises have not a whit more title to the child than I have," he burst out. "You are a lawyer, Carleton, and you know that. I am just as much Jean's uncle as Tom Curtis is; in fact I think I am more her uncle because I am her father's own brother. I'm a Cabot, and so is Jean. I should think that ought to be enough. Who would she live with, if not with the Cabots?"

"You certainly have a strong claim to the little girl," he agreed. "But you see my other client puts up an equally convincing story....