The Story of Germ Life 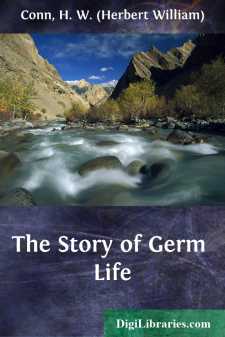 CHAPTER I. BACTERIA AS PLANTS.

During the last fifteen years the subject of bacteriology [Footnote: The term microbe is simply a word which has been coined to include all of the microscopic plants commonly included under the terms bacteria and yeasts.] has developed with a marvellous rapidity. At the beginning of the ninth decade of the century bacteria were scarcely heard of outside of scientific circles, and very little was known about them even among scientists. Today they are almost household words, and everyone who reads is beginning to recognise that they have important relations to his everyday life. The organisms called bacteria comprise simply a small class of low plants, but this small group has proved to be of such vast importance in its relation to the world in general that its study has little by little crystallized into a science by itself. It is a somewhat anomalous fact that a special branch of science, interesting such a large number of people, should be developed around a small group of low plants. The importance of bacteriology is not due to any importance bacteria have as plants or as members of the vegetable kingdom, but solely to their powers of producing profound changes in Nature. There is no one family of plants that begins to compare with them in importance. It is the object of this work to point out briefly how much both of good and ill we owe to the life and growth of these microscopic organisms. As we have learned more and more of them during the last fifty years, it has become more and more evident that this one little class of microscopic plants fills a place in Nature's processes which in some respects balances that filled by the whole of the green plants. Minute as they are, their importance can hardly be overrated, for upon their activities is founded the continued life of the animal and vegetable kingdom. For good and for ill they are agents of neverceasing and almost unlimited powers.

The study of bacteria practically began with the use of the microscope. It was toward the close of the seventeenth century that the Dutch microscopist, Leeuwenhoek, working with his simple lenses, first saw the organisms which we now know under this name, with sufficient clearness to describe them. Beyond mentioning their existence, however, his observations told little or nothing. Nor can much more be said of the studies which followed during the next one hundred and fifty years. During this long period many a microscope was turned to the observation of these minute organisms, but the majority of observers were contented with simply seeing them, marvelling at their minuteness, and uttering many exclamations of astonishment at the wonders of Nature. A few men of more strictly scientific natures paid some attention to these little organisms. Among them we should perhaps mention Von Gleichen, Muller, Spallanzani, and Needham. Each of these, as well as others, made some contributions to our knowledge of microscopical life, and among other organisms studied those which we now call bacteria....