The Story of General Gordon 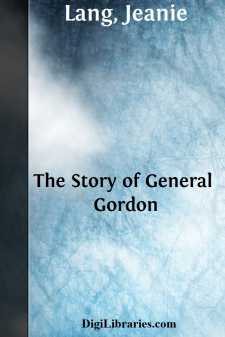 Sixty years ago, at Woolwich, the town on the Thames where the gunners of our army are trained, there lived a mischievous, curly-haired, blue-eyed boy, whose name was Charlie Gordon.

The Gordons were a Scotch family, and Charlie came of a race of soldiers. His great-grandfather had fought for King George, and was taken prisoner at the battle of Prestonpans, when many other Gordons were fighting for Prince Charlie. His grandfather had served bravely in different regiments and in many lands. His father was yet another gallant soldier, who thought that there was no life so good as the soldier's life, and nothing so fine as to serve in the British army. Of him it is said that he was "kind-hearted, generous, cheerful, full of humour, always just, living by the code of honour," and "greatly beloved." His wife belonged to a family of great merchant adventurers and explorers, the Enderbys, whose ships had done many daring things on far seas.

Charlie Gordon's mother was one of the people who never lose their tempers, who always make the best of everything, and who are always thinking of how to help others and never of themselves.

So little Charlie came of brave and good people, and when he was a very little boy he must have heard much of his soldier uncles and cousins and his soldier brother, and must even have seen the swinging kilts and heard the pipes of the gallant regiment that is known as the Gordon Highlanders.

Charles George Gordon was born at Woolwich on the 28th January 1833, but while he was still a little child his father, General Gordon, went to hold a command in Corfu, an island off the coast of Turkey, at the mouth of the Adriatic Sea. The Duke of Cambridge long afterwards spoke of the bright little boy who used to be in the room next his in that house in Corfu, but we know little of Charles Gordon until he was ten years old. His father was then given an important post at Woolwich, and he and his family returned to England.

In long after years he wrote to one of his nieces about the great building at Woolwich where firearms for the British army are made and stored: "You never, any of you, made a proper use of the Arsenal workmen, as we did. They used to neglect their work for our orders, and turned out some splendid squirts—articles that would wet you through in a minute. As for the cross-bows they made, they were grand with screws."

There were five boys and six girls in the Gordon family. Charlie was the fourth son, and two of his elder brothers were soldiers while he was still quite a little lad.

It was in his holidays that the Arsenal was his playground, for on the return from Corfu he was sent to school at Taunton, where you may still see his initials, "C.G.G.", carved deep on the desk he used.

At school he did not seem to be specially clever. He was not fond of lessons, but he drew very well, and made first-rate maps. He was always brimful of high spirits and mischief, and ready for any sort of sport, and the people of Woolwich must have sighed when Charlie came home for his holidays....