The Story of Garfield Farm-boy, Soldier, and President 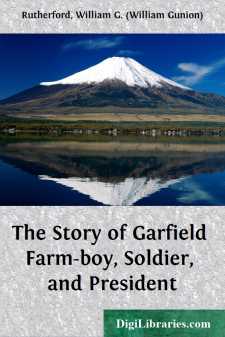 CHAPTER I. THE FAR WEST.

Go to Liverpool or Glasgow, and embark on one of the great ocean steamers, which are constantly crossing the Atlantic. Sail westwards for about a week, and you will reach the eastern shores of the New World.

If you land at New York, you will find yourself in one of the largest cities on the face of the globe. You will also find the country largely peopled by the same race as yourself, and everywhere you will be addressed in your own language. You may travel for weeks from town to town, and from city to city, until you are lost in wonder at the vast and populous empire which English-speaking people have founded and built up on the other side of the Atlantic.

Where is the New World of fancy and fiction so graphically described in Indian stories and tales of backwoods life? And where are the vast prairies and almost boundless forests of sober fact, where the bear, the wolf, and the buffalo roamed at will—the famous hunting-grounds of the Red Indians and the trappers of the Old World?

Where is the "Far West" of song and story? Where are the scenes of Fenimore Cooper's charming descriptions, which have thrown a halo of romance over the homes of the early settlers who first explored those unknown regions?

For the most part they are gone for ever, as they appeared to the eyes of the pioneers and pathfinders, who wandered for weeks through the wilderness, without hearing the sound of any human voice but their own. Now on forest and prairie land stand great cities, equal in population and wealth to many famous places, which were grey with age before the New World was discovered. The trading posts, once scattered over a wide region, where Indians and white hunters met to barter the skins of animals for fire-water and gunpowder, have disappeared before the advances of civilisation, and the uninhabited wilderness of fifty years ago has become the centre of busy industries of world-wide fame and importance.

Sixty years ago, fifteen of the largest cities in the United States had no existence. They were not born. Living men remember when they were first staked out on the unbroken prairie, and the woodsman's axe was busy clearing the ground for the log huts of the first settlers who founded the cities of to-day.

At that period, Chicago, now a "Millionaire city," and the second in America, consisted of a little fort and a few log huts. There was scarcely a white woman in the settlement, and no roads had been constructed. The ground on which the great city now stands could have been bought for the sum now demanded for a few square feet in one of its busy streets.

No wonder the American people are proud of "the Queen City of the West." It stands far inland, a thousand miles from the ocean, and yet it is an important port on the shores of Lake Michigan, and steamers from London can land their cargoes at its quays. More than twenty thousand vessels enter and leave the port in one year....