The Story of Bawn 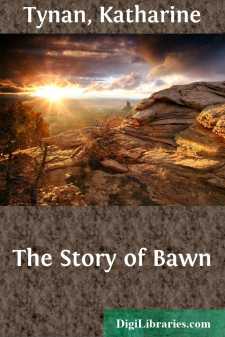 I am Bawn Devereux, and I have lived as long as I remember at Aghadoe Abbey with my grandfather and grandmother, the Lord and Lady St. Leger.

At one time we were a family of five. There was my Uncle Luke, and there was my cousin Theobald.

Theobald was my boy cousin, and we played together up and down the long corridors in winter, and in the darkness of the underground passage, in summer in the woods and shrubberies and gardens, and we were happy together.

I was eager to please Theobald, and I put away from me my natural shrinkings from things he did not mind, lest he should despise me and be dissatisfied with me, longing for a boy's company. I would do all he did, and I must have been a famous tomboy. But my reward was that he never seemed to desire other company than mine.

Once, indeed, I remember that when he handed me live bait to put upon the hook I turned suddenly pale and burst into tears.

When I had done it I looked at him apprehensively, dreading to see his contempt written in his face, but there was no such thing. There was instead the dawn of a new feeling. My cousin's face wore such an expression as I had never seen in it before. He was at this time a tall boy of fifteen, and Bridget Connor, my grandmother's maid, was making me my first long frock.

He looked at me with that strange expression, and he said, "Poor little Bawn!"

It was the beginning of the new order of things in which I fagged for him no more, but was spared the labours and fatigues I had endured cheerfully during our early years. Indeed, I often wonder now at the things I did for him, such things as the feminine nature turns from with horror, although they seem to come naturally enough to a boy.

That day I heard my grandfather and grandmother discussing me.

Theobald was playing in a cricket match in the neighbourhood, and I was at home, reading in one of the recesses of the library. The book was Thackeray's "Henry Esmond," and I was so lost in the romance and tenderness of it—I was at that chapter where Harry returns bringing his sheaves with him—that I did not notice what they were saying till my own name caught my ears.

I remember that the afternoon had come on wet, and that while I read the wet branches of the lilac beat against the leaded window. I could see the flowers through an open pane, and smell their delightful perfume. There was an apple tree in view, too, with all its blossoms hanging in pink limpness.

"Bawn is the very moral of what I was at her age," my grandmother said. "Have you noticed, Toby"—my grandfather also was a Theobald—"how tall she grows? And how she sways in walking like a poplar tree? She has my complexion before it ran in streaks, and my hair before it faded, and my eyes before they were dim. She has the carriage of the head which made them call me the Swan of Dunclody. She will be fifteen come Michaelmas, and she shall have my pearls for her neck."

I heard her in an excessive surprise. My grandmother had been esteemed a great beauty in her day and had been sung by the ballad-singers. Was it possible that my looks could be like hers? I had not thought about them hitherto any more than my cousin had about his. It was with almost a sense of relief that I heard my grandfather's reply.

"The child is well enough," he said, "but as for being so like you, that she is not, nor ever will have your share of beauty. As for your spoilt roses I do not see them, nor the dimmed eyes, nor the faded hair. You were lovely when I saw you first, and you are no less lovely in my sight to-day."

"In your sight—at seventy!" my grandmother said; and I could picture to myself the well-pleased expression of her dear face....