The Story of Baden-Powell 'The Wolf That Never Sleeps' 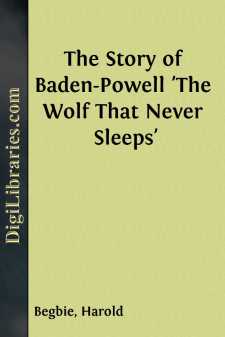 CHAPTER I AN INTRODUCTORY FRAGMENT ON NO ACCOUNT TO BE SKIPPED

You will be the first to grant me, honoured sir, that after earnestness of purpose, that is to say "keenness," there is no quality of the mind so essential to the even-balance as humour. The schoolmaster without this humanising virtue never yet won your love and admiration, and to miss your affection and loyalty is to lose one of life's chiefest delights. You are as quick to detect the humbug who hides his mediocrity behind an affectation of dignity as was dear old Yorick, of whom you will read when you have got to know the sweetness of Catullus. This Yorick it was who declared that the Frenchman's epigram describing gravity as "a mysterious carriage of the body to cover the defects of the mind," deserved "to be wrote in letters of gold"; and I make no doubt that had there been a greater recognition of the extreme value and importance of humour in the early ages of the world, our history books would record fewer blunders on the part of kings, counsellors, and princes, and the great churches would not have alienated the sympathy of so many goodly people at the most important moment in their existence—the beginning of their proselytism.

This erudite reflection is to prepare you for the introduction of my hero, Robert Stephenson Smyth Baden-Powell. I introduce him to you as a hero—and as a humourist. To me he appears the ideal English schoolboy, and the ideal British officer; but if I had blurted this out at the beginning of my story you might perhaps have flung the book into an ink-stained corner, thinking you were in for a dull lecture. It is the misfortune of goodness to be generally treated with superstitious awe, as though it were a visitant from heaven, instead of being part and parcel of our own composition. So I begin by assuring you that if ever there was a light-hearted, jovial creature it is my hero, and by promising you that he shall not bore you with moral disquisitions, nor shock your natural and untainted mind with impossible precepts.

He is a hero in the best sense of the word, living cleanly, despising viciousness equally with effeminacy, and striving after the development of his talents, just as a wise painter labours at the perfecting of his picture. Permit me here to quote the words of a sagacious Florentine gentleman named Guicciardini: "Men," says he, "are all by nature more inclined to do good than ill; nor is there anybody who, where he is not by some strong consideration pulled the other way, would not more willingly do good than ill."

Goodness, then, is a part of our being; therefore when you are behaving yourself like a true man, do not flatter yourself that you are doing any superhuman feat. And do not, as some do, have a sort of stupid contempt for people who respect truth, honesty, and purity, people who work hard at school, never insult their masters, and try to get on in the world without soiling their fingers and draggling their skirts in the mire. But see you cultivate humour as you go along....