The Story of a Nodding Donkey 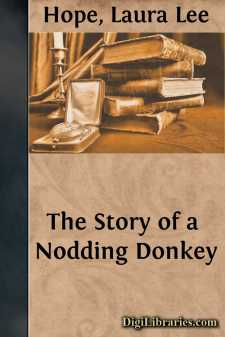 CHAPTER I THE SANTA CLAUS SHOP

The Nodding Donkey dated his birth from the day he received the beautiful coat of varnish in the workshop of Santa Claus at the North Pole. Before that he was just some pieces of wood, glued together. His head was not glued on, however, but was fastened in such a manner that with the least motion the Donkey could nod it up and down, and also sidewise.

It is not every wooden donkey who is able to nod his head in as many ways as could the Donkey about whom I am going to tell you. This Nodding Donkey was an especially fine toy, and, as has been said, his first birthday was that on which he received such a bright, shiny coat of varnish.

"Here, Santa Claus, look at this, if you please!" called one of the jolly workmen in the shop of St. Nicholas. "Is this toy finished, now?" and he held up the Nodding Donkey.

Santa Claus, who was watching another man put some blue eyes in a golden-haired doll, came over to the bench where sat the man who had made the Nodding Donkey out of some bits of wood, glue, and real hair for his mane and tail.

"Hum! Yes! So you have finished the Nodding Donkey, have you?" asked Santa Claus, as he stroked his long, white beard.

"I'll call him finished if you say he is all right," answered the man, smiling as he put the least tiny dab more of varnish on the Donkey's back. "Shall I set him on the shelf to dry, so you may soon take him down to Earth for some lucky boy or girl?"

"Yes, he is finished. Set him on the shelf with the other toys," answered dear old St. Nicholas, and then, having given a last look at the Donkey, the workman placed him on a shelf, next to a wonderful Plush Bear, of whom I shall tell you more in another book.

"Well, I'm glad he's finished," said Santa Claus' worker, as he took up his tools to start making a Striped Tiger, with a red tongue. "That Nodding Donkey took me quite a while to finish. I hope nothing happens to him until his coat of varnish is hard and dry. My, but he certainly shines!"

"Not so bad!" he thought. "In fact, I'm quite stylish. I'm almost as gay as some of the clowns." And his head bobbed slowly up and down, for it was fastened so that the least jar or jiggle would move it.

"I must be very careful," said the Nodding Donkey to himself. "I must not move about too much nor let any of the other toys rub against me until I am quite dry. If they did they would blur or scratch my shiny varnish coat, and that would be too bad. But after I am dry I'll have some fun. Just wait until to-night! Then there will be some great times in this workshop of Santa Claus!"

The reason the Nodding Donkey said this, was because at night, when Santa Claus and his merry helpers had gone, the toys were allowed to do as they pleased. They could make believe come to life, and move about, having all sorts of adventures....