The Story of a Monkey on a Stick 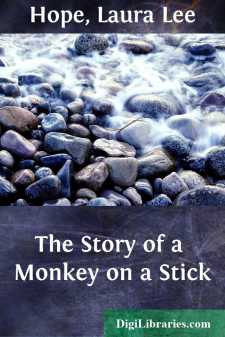 CHAPTER I A STRANGE AWAKENING

The Monkey on a Stick opened his eyes and looked around. That is he tried to look around; but all he could see, on all sides of him, was pasteboard box. He was lying on his back, with his hands and feet clasped around the stick, up which he had climbed so often.

"Well, this is very strange," said the Monkey on a Stick, as he rubbed his nose with one hand, "very strange indeed! Why should I wake up here, when last night I went to sleep in the toy store? I can't understand this at all!"

Once more he looked about him. He surely was inside a pasteboard box. He could see the cover of it over his head as he lay on his back, and he could see one side of the box toward his left hand, while another side of the box was at his right hand.

"And," said the Monkey on a Stick, speaking to himself, as he often did, "I suppose the bottom of the pasteboard box is under me. I must be lying on that."

He unclasped the toes of his left foot from the stick and banged his foot down two or three times.

"Yes, there's pasteboard all around me," said the Monkey. "This surely is very strange! I wonder if the Calico Clown has been up to any of his tricks? Maybe he thinks I'm a riddle, and he's going to tell it to the Elephant from the Noah's Ark, or else make a joke of me to the Jumping Jack. I haven't been shut up in a box before—not since the time Santa Claus brought me from his workshop at the North Pole. I wonder what this means?"

The Monkey raised his head and banged it on the box cover.

"Oh, my cocoanut!" cried the Monkey, for that is what he sometimes called his head. "My poor cocoanut!" he went on, as he put up his hand. "I wonder if I raised a big lump on my cocoanut!"

But his head seemed to be all right, and, taking care not to bang himself again, the Monkey began pushing on the box cover. It was not heavy, and he slowly raised it until he could look out.

As I have told you in the other books of this series, the Monkey on a Stick, and the other toys as well, could move about and talk, when they kept to certain rules. You may find out what those rules were by looking in the other books.

The Monkey on a Stick looked out from beneath the cover of the box, and what he saw surprised him almost as much as he had been startled when he found pasteboard on all sides of him. For the Monkey saw that he was in the room of a strange house, and not in the big toy department of the store where he had lived for so long a time.

"I say!" chattered the Monkey to himself, "there is something wrong here. They must have given me paregoric to make me sleep, and then have put me in a box and carted me down to some other part of the store. I'm sure the Calico Clown must have had a hand in this. He and his jokes and riddles about what makes more noise than a pig under a gate! I'll fix him when I get out of here!"

The Monkey raised the box cover higher and began to call:

"Hi there, Calico Clown! what do you mean by shutting me up in a pasteboard box? What's the joke? Come on, Mr....