The Story of a Mine 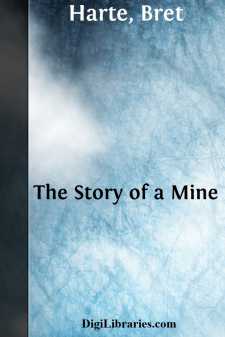 CHAPTER I WHO SOUGHT IT

It was a steep trail leading over the Monterey Coast Range. Concho was very tired, Concho was very dusty, Concho was very much disgusted. To Concho's mind there was but one relief for these insurmountable difficulties, and that lay in a leathern bottle slung over the machillas of his saddle. Concho raised the bottle to his lips, took a long draught, made a wry face, and ejaculated:

It appeared that the bottle did not contain aguardiente, but had lately been filled in a tavern near Tres Pinos by an Irishman who sold had American whisky under that pleasing Castilian title. Nevertheless Concho had already nearly emptied the bottle, and it fell back against the saddle as yellow and flaccid as his own cheeks. Thus reinforced Concho turned to look at the valley behind him, from which he had climbed since noon. It was a sterile waste bordered here and there by arable fringes and valdas of meadow land, but in the main, dusty, dry, and forbidding. His eye rested for a moment on a low white cloud line on the eastern horizon, but so mocking and unsubstantial that it seemed to come and go as he gazed. Concho struck his forehead and winked his hot eyelids. Was it the Sierras or the cursed American whisky?

Again he recommenced the ascent. At times the half-worn, half-visible trail became utterly lost in the bare black outcrop of the ridge, but his sagacious mule soon found it again, until, stepping upon a loose boulder, she slipped and fell. In vain Concho tried to lift her from out the ruin of camp kettles, prospecting pans, and picks; she remained quietly recumbent, occasionally raising her head as if to contemplatively glance over the arid plain below. Then he had recourse to useless blows. Then he essayed profanity of a secular kind, such as "Assassin," "Thief," "Beast with a pig's head," "Food for the Bull's Horns," but with no effect.

Then he had recourse to the curse ecclesiastic:

"Ah, Judas Iscariot! is it thus, renegade and traitor, thou leavest me, thy master, a league from camp and supper waiting? Stealer of the Sacrament, get up!"

Still no effect. Concho began to feel uneasy; never before had a mule of pious lineage failed to respond to this kind of exhortation. He made one more desperate attempt:

"Ah, defiler of the altar! lie not there! Look!" he threw his hand into the air, extending the fingers suddenly. "Behold, fiend! I exorcise thee! Ha! tremblest! Look but a little now,—see! Apostate! I—I—excommunicate thee,—Mula!"

"What are you kicking up such a devil of row down there for?" said a gruff voice from the rocks above.

Concho shuddered. Could it be that the devil was really going to fly away with his mule? He dared not look up.

"Come now," continued the voice, "you just let up on that mule, you d——d old Greaser. Don't you see she's slipped her shoulder?"

Alarmed as Concho was at the information, he could not help feeling to a certain extent relieved. She was lamed, but had not lost her standing as a good Catholic....