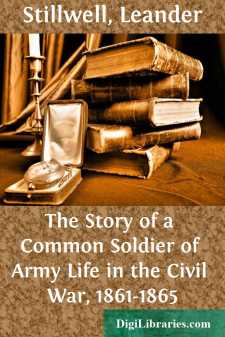 THE BEGINNING OF THE WAR. LIFE AT CAMP CARROLLTON, JANUARY AND FEBRUARY, 1862.

I was born September 16, 1843, on a farm, in Otter Creek precinct, Jersey County, Illinois. I was living with my parents, in the little old log house where I was born, when the Civil war began. The Confederates fired on Fort Sumter on April 12, 1861, and thus commenced the war. On April 15, 1861, President Lincoln issued a call for 75,000 men, to aid in putting down the existing rebellion. Illinois promptly furnished her quota, and in addition, thousands of men were turned away, for the reason that the complement of the State was complete, and there was no room for them. The soldiers under this call were mustered in for three months' service only, for the government then seemed to be of the opinion that the troubles would be over by the end of that time. But on May 3, 1861, Mr. Lincoln issued another call for volunteers, the number specified being a little over 42,000, and their term of service was fixed at three years, unless sooner discharged. The same call provided for a substantial increase in the regular army and navy. I did not enlist under either of these calls. As above stated, the belief then was almost universal throughout the North that the "war" would amount to nothing much but a summer frolic, and would be over by the 4th of July. We had the utmost confidence that Richmond would be taken by that time, and that Jeff Davis and his cabinet would be prisoners, or fugitives. But the battle of Bull Run, fought on July 21, 1861, gave the loyal people of the Nation a terrible awakening. The result of this battle was a crushing disappointment and a bitter mortification to all the friends of the Union. They realized then that a long and bloody struggle was before them. But Bull Run was probably all for the best. Had it been a Union victory, and the Rebellion then been crushed, negro slavery would have been retained, and the "irrepressible conflict" would have been fought out likely in your time, with doubtless tenfold the loss of life and limb that ensued in the war of the sixties.

The day after the battle of Bull Run Congress passed a law authorizing Mr. Lincoln to call for five hundred thousand three-years volunteers. It was under this law, supplemented by authority from the Secretary of War, that the regiment was organized in which I subsequently enlisted. I was then only a boy, but somehow I felt that the war was going to be a long one, and that it was the duty of every young fellow of the requisite physical ability to "go for a soldier," and help save the Nation. I had some talk with my father on the subject. He was a strong Union man, and in sympathy with my feelings, but I could see that naturally he dreaded the idea of his boy going to the war, with the result that maybe he would be killed, or come home a cripple for life. But I gave him to understand that when they began organizing a regiment in our vicinity, and which would contain a fair proportion of my neighbor boys and acquaintances, I intended then to volunteer....