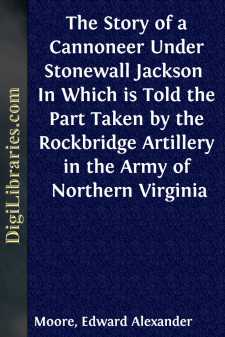 Add to My Favorites
Published: 9 years ago
Downloads: 100
Rating: (0 Votes)

At the age of eighteen I was a member of the Junior Class at Washington College at Lexington, Virginia, during the session of 1860-61, and with the rest of the students was more interested in the foreshadowings of that ominous period than in the teachings of the professors. Among our number there were a few from the States farther south who seemed to have been born secessionists, while a large majority of the students were decidedly in favor of the Union.

Our president, the Rev. Dr. George Junkin, who hailed from the North, was heart and soul a Union man, notwithstanding the fact that one of his daughters was the first wife of Major Thomas J. Jackson, who developed into the world-renowned "Stonewall" Jackson. Another daughter was the great Southern poetess, Mrs. Margaret J. Preston, and Dr. Junkin's son, Rev. W. F. Junkin, a most lovable man, became an ardent Southern soldier and a chaplain in the Confederate Army throughout the war.

At the anniversary of the Washington Literary Society, on February 22, 1861, the right of secession was attacked and defended by the participants in the discussion, with no less zeal than they afterward displayed on many bloody battlefields.

We had as a near neighbor the Virginia Military Institute, "The West Point of the South," where scores of her young chivalry were assembled, who were eager to put into practice the subjects taught in their school. Previous to these exciting times not the most kindly feelings, and but little intercourse had existed between the two bodies of young men. The secession element in the College, however, finding more congenial company among the cadets, opened up the way for quite intimate and friendly relations between the two institutions. In January, 1861, the corps of cadets had been ordered by Governor Wise to be present, as a military guard, at the execution of John Brown at Harper's Ferry. After their return more than the usual time was given to the drill; and target-shooting with cannon and small arms was daily practised in our hearing.

Only a small proportion of the citizens of the community favored secession, but they were very aggressive. One afternoon, while a huge Union flag-pole was being raised on the street, which when half-way up snapped and fell to the ground in pieces, I witnessed a personal encounter between a cadet and a mechanic (the latter afterward deserted from our battery during the Gettysburg campaign in Pennsylvania, his native State), which was promptly taken up by their respective friends. The cadets who were present hastened to their barracks and, joined by their comrades, armed themselves, and with fixed bayonets came streaming at double-quick toward the town. They were met at the end of Main street by their professors, conspicuous among whom was Colonel Colston on horseback. He was a native of France and professor of French at the Institute; he became a major-general in the Confederate Army and later a general in the Egyptian Army. After considerable persuasion the cadets were induced to return to their barracks....