The Story of a Candy Rabbit 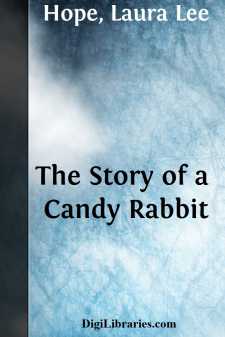 CHAPTER I IS HE IN FAIRYLAND?

"No, I am not asleep! I am not dreaming," said the Candy Rabbit, speaking to himself in a low voice. "I am wide awake, but what strange things I see! I wonder what it all means!"

"This is very strange," said the sweet chap, rubbing his eyes again. "Who ever heard of an egg with a window in it? I wonder if any one lives in that egg? It is not large enough for a house, of course; but still, some very little folk might stay in it. I'll take a look through that window."

The Candy Rabbit gave three hops and stood closer to the large egg. It glittered and sparkled in the light as newly fallen snow glitters under the moon. The Candy Rabbit looked in through the glass window, and what he saw inside the egg made him wonder more and more.

For he saw a church and some houses, a path leading over a little brook of water, and on the bank of the brook stood a little boy fishing.

"Well, I do declare!" exclaimed the Candy Rabbit. "Think of all those things inside an egg—a church, a house and a little boy! I wonder what has happened to me! Yesterday I was on the toy counter, with the Calico Clown and the Monkey on a Stick, and to-day I seem to be in Fairyland. I wonder if this really is Fairyland? I guess I'd better look around some more."

He glanced again through the little glass window in the egg, and he thought he saw the little boy on the bank of the brook smiling at him. And the Candy Rabbit smiled back. Then the Bunny turned around and he saw, near him, a big chocolate egg. It was covered with twists and curlicues of sugar and candy, and in the end of this egg, also, was a glass window.

"Well, this certainly is surprising!" exclaimed the Candy Rabbit. "I wonder what I can see through that window!"

He looked and saw a little duck and a little chicken inside the chocolate egg. The little chicken was on one end of a small seesaw, and the little duck was on the other end. And as the Candy Rabbit looked through the glass window, he saw the seesaw begin to go up and down.

The Candy Rabbit shook his head. Once more he rubbed his paws over his pink glass eyes.

"I have heard of many strange things," he said to himself. "The Sawdust Doll told some of her queer adventures, and so did the White Rocking Horse and the Bold Tin Soldier. But never, in all my life, did I ever see a chocolate egg with a glass window and a little chicken and a duck inside seesawing and teeter-tautering! I think I had better go to the doctor's, something must be the matter with me!"

"What's the matter with you?" suddenly asked a voice behind the Candy Rabbit. The sweet chap turned so quickly that he almost cracked one of his sugary ears....