The Storm-Cloud of the Nineteenth Century Two Lectures delivered at the London Institution February 4th and 11th, 1884 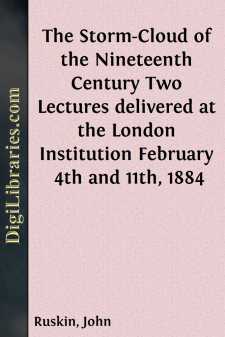 The following lectures, drawn up under the pressure of more imperative and quite otherwise directed work, contain many passages which stand in need of support, and some, I do not doubt, more or less of correction, which I always prefer to receive openly from the better knowledge of friends, after setting down my own impressions of the matter in clearness as far as they reach, than to guard myself against by submitting my manuscript, before publication, to annotators whose stricture or suggestion I might often feel pain in refusing, yet hesitation in admitting.

But though thus hastily, and to some extent incautiously, thrown into form, the statements in the text are founded on patient and, in all essential particulars, accurately recorded observations of the sky, during fifty years of a life of solitude and leisure; and in all they contain of what may seem to the reader questionable, or astonishing, are guardedly and absolutely true.

In many of the reports given by the daily press, my assertion of radical change, during recent years, in weather aspect was scouted as imaginary, or insane. I am indeed, every day of my yet spared life, more and more grateful that my mind is capable of imaginative vision, and liable to the noble dangers of delusion which separate the speculative intellect of humanity from the dreamless instinct of brutes: but I have been able, during all active work, to use or refuse my power of contemplative imagination, with as easy command of it as a physicist's of his telescope: the times of morbid are just as easily distinguished by me from those of healthy vision, as by men of ordinary faculty, dream from waking; nor is there a single fact stated in the following pages which I have not verified with a chemist's analysis, and a geometer's precision.

The first lecture is printed, with only addition here and there of an elucidatory word or phrase, precisely as it was given on the 4th February. In repeating it on the 11th, I amplified several passages, and substituted for the concluding one, which had been printed with accuracy in most of the leading journals, some observations which I thought calculated to be of more general interest. To these, with the additions in the first text, I have now prefixed a few explanatory notes, to which numeral references are given in the pages they explain, and have arranged the fragments in connection clear enough to allow of their being read with ease as a second Lecture.

Let me first assure my audience that I have no arrière pensée in the title chosen for this lecture. I might, indeed, have meant, and it would have been only too like me to mean, any number of things by such a title;—but, to-night, I mean simply what I have said, and propose to bring to your notice a series of cloud phenomena, which, so far as I can weigh existing evidence, are peculiar to our own times; yet which have not hitherto received any special notice or description from meteorologists....