The Station; The Party Fight And Funeral; The Lough Derg Pilgrim Traits And Stories Of The Irish Peasantry, The Works of William Carleton, Volume Three 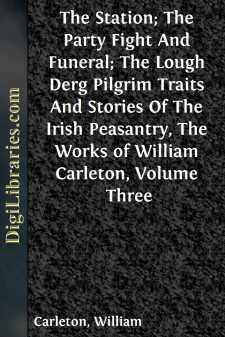 Our readers are to suppose the Reverend Philemy M'Guirk, parish priest of Tir-neer, to be standing upon the altar of the chapel, facing the congregation, after having gone through the canon of the Mass; and having nothing more of the service to perform, than the usual prayers with which he closes the ceremony.

"Take notice, that the Stations for the following week will be held as follows:—

"On Monday, in Jack Gallagher's of Corraghnamoddagh. Are you there, Jack?"

"To the fore, yer Reverence."

"Why, then, Jack, there's something ominous—something auspicious—to happen, or we wouldn't have you here; for it's very seldom that you make part or parcel of this present congregation; seldom are you here, Jack, it must be confessed: however, you know the old classical proverb, or if you don't, I do, which will just answer as well—Non semper ridet Apollo—it's not every day Manus kills a bullock; so, as you are here, be prepared for us on Monday."

"Never fear, yer Reverence, never fear; I think you ought to know that the grazin' at Corraghnamoddagh's not bad."

"To do you justice, Jack, the mutton was always good with you, only if you would get it better killed it would be an improvement. Get Tom McCusker to kill it, and then it'll have the right smack."

"On Tuesday, in Peter Murtagh's of the Crooked Commons. Are you there, Peter?"

"Indeed, Peter, I might know you are here; and I wish that a great many of my flock would take example by you: if they did, I wouldn't be so far behind in getting in my dues. Well, Peter, I suppose you know that this is Michaelmas?"*

* Michaelmas is here jocularly alluded to as that periodof the year when geese are fattest.

"So fat, yer Reverence, that they're not able to wag; but, any way, Katty has them marked for you—two fine young crathurs, only this year's fowl, and the ducks isn't a taste behind them—she crammin' them this month past."

"I believe you, Peter, and I would take your word for more than the condition of the geese. Remember me to Katty, Peter."

"Do you know what keeps that reprobate from mass?"

"I bleeve he's takin' advantage, sir, of the frost, to get in his praties to-day, in respect of the bad footin', sir, for the horses in the bog when there's not a frost. Any how, betune that and a bit of a sore head that he got, yer Reverence, on Thursday last in takin' part wid the O'Scallaghans agin the Bradys, I bleeve he had to stay away to-day."

"On the Sabbath day, too, without my leave! Well, tell him from me, that I'll make an example of him to the whole parish, if he doesn't attend mass better. Will the Bradys and the O'Scallaghans never be done with their quarrelling? I protest, if they don't live like Christians, I'll read them out from the altar....