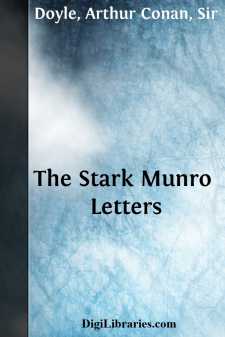 I have missed you very much since your return to America, my dear Bertie, for you are the one man upon this earth to whom I have ever been able to unreservedly open my whole mind. I don't know why it is; for, now that I come to think of it, I have never enjoyed very much of your confidence in return. But that may be my fault. Perhaps you don't find me sympathetic, even though I have every wish to be. I can only say that I find you intensely so, and perhaps I presume too much upon the fact. But no, every instinct in my nature tells me that I don't bore you by my confidences.

Can you remember Cullingworth at the University? You never were in the athletic set, and so it is possible that you don't. Anyway, I'll take it for granted that you don't, and explain it all from the beginning. I'm sure that you would know his photograph, however, for the reason that he was the ugliest and queerest-looking man of our year.

Physically he was a fine athlete—one of the fastest and most determined Rugby forwards that I have ever known, though he played so savage a game that he was never given his international cap. He was well-grown, five foot nine perhaps, with square shoulders, an arching chest, and a quick jerky way of walking. He had a round strong head, bristling with short wiry black hair. His face was wonderfully ugly, but it was the ugliness of character, which is as attractive as beauty. His jaw and eyebrows were scraggy and rough-hewn, his nose aggressive and red-shot, his eyes small and near set, light blue in colour, and capable of assuming a very genial and also an exceedingly vindictive expression. A slight wiry moustache covered his upper lip, and his teeth were yellow, strong, and overlapping. Add to this that he seldom wore collar or necktie, that his throat was the colour and texture of the bark of a Scotch fir, and that he had a voice and especially a laugh like a bull's bellow. Then you have some idea (if you can piece all these items in your mind) of the outward James Cullingworth.

But the inner man, after all, was what was most worth noting. I don't pretend to know what genius is. Carlyle's definition always seemed to me to be a very crisp and clear statement of what it is NOT. Far from its being an infinite capacity for taking pains, its leading characteristic, as far as I have ever been able to observe it, has been that it allows the possessor of it to attain results by a sort of instinct which other men could only reach by hard work. In this sense Cullingworth was the greatest genius that I have ever known. He never seemed to work, and yet he took the anatomy prize over the heads of all the ten-hour-a-day men. That might not count for much, for he was quite capable of idling ostentatiously all day and then reading desperately all night; but start a subject of your own for him, and then see his originality and strength. Talk about torpedoes, and he would catch up a pencil, and on the back of an old envelope from his pocket he would sketch out some novel contrivance for piercing a ship's netting and getting at her side, which might no doubt involve some technical impossibility, but which would at least be quite plausible and new....