The Standard Operas (12th edition) Their Plots, Their Music, and Their Composers 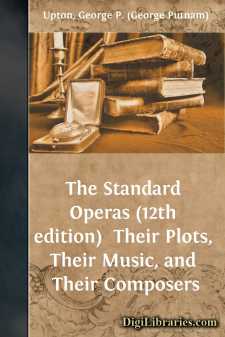 Daniel François Esprit Auber, one of the most prominent representatives of the opera comique, was born at Caen, in Normandy, Jan. 29, 1784. He first attracted attention in the musical world by his songs and ballads, written when a mere boy. Young as he was, they were great favorites in French and English drawing-rooms, and their success diverted him from his commercial intentions to that profession in which he was destined to achieve such popularity. His début was made as an instrumental composer in his twentieth year, but before he had reached his thirtieth he was engrossed with operatic composition. His first two works were unsuccessful; but the third, "La Bergère Châtelaine," proved the stepping-stone to a career of remarkable popularity, during which he produced a large number of dramatic works, which not only secured for him the enthusiastic admiration of the Parisians, with whom he was always a favorite, but also carried his name and fame throughout the world, and obtained for him marks of high distinction from royalty, such as the office of Director of the Conservatoire from Louis Philippe, and that of Imperial Maître de Chapelle from Louis Napoleon. He died May 13, 1871, amid the fearful scenes of the Paris Commune. His best-known operas are: "Masaniello" (1828); "Fra Diavolo" (1830); "The Bronze Horse" (1835); "The Black Domino" (1837); "The Crown Diamonds" (1841); and "Zerline" (1851),—the last-named written for the great contralto, Mme. Alboni. Of these, "Fra Diavolo," "Masaniello," and "The Crown Diamonds" are as fresh as ever in their French and Italian settings, though their finest successes in this country have been made in their English dress.

"Fra Diavolo," opera comique, in three acts, words by Scribe, was first produced at the Opera Comique, Paris, Jan. 28, 1830; in English, at Drury Lane, London, Nov. 3, 1831; in Italian, at the Lyceum, London, July 9, 1857, for which occasion the spoken dialogue was converted into accompanied recitative. The composer himself also, in fitting it for the Italian stage, made some changes in the concerted music and added several morceaux. The original Italian cast was as follows:—

The original of the story of Fra Diavolo is to be found in Lesueur's opera, "La Caverne," afterwards arranged as a spectacular piece and produced in Paris in 1808 by Cuvellier and Franconi, and again in Vienna in 1822 as a spectacle-pantomime, under the title of "The Robber of the Abruzzi." In Scribe's adaptation the bandit, Fra Diavolo, encounters an English nobleman and his pretty and susceptible wife, Lord and Lady Allcash, at the inn of Terracina, kept by Matteo, whose daughter Zerlina is loved by Lorenzo, a young soldier, on the eve of starting to capture Fra Diavolo when the action of the opera begins. In the first scene the English couple enter in great alarm, having narrowly escaped the robbery of all their valuables by Fra Diavolo's band....