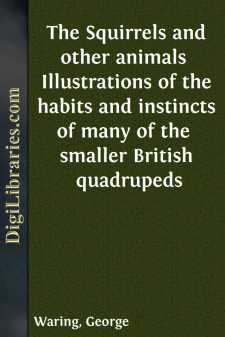 "Bless me, I do believe I have been asleep!" said a squirrel, one fine morning in early spring, when the delicious warmth of the sun had reached him in his winter retreat, and roused the lazy little fellow from a two months' nap. The truth is, that he and his family had fallen asleep at the first setting in of the cold weather, and had passed the dismal winter in a state of profound repose, except, that, during a warm day or two in January, they had roused themselves for a short time, and eaten a few nuts and acorns from their winter store.

"Yes, I have certainly been asleep," said the squirrel, "and I fancy I have had a pretty long nap too. Well, I declare, my lazy wife and children are lying there still, curled up like so many dead things! Hallo, Mrs. Brush! come, get up and eat some breakfast. Here is the sun shining in most gloriously at the mouth of the hole, and I hear the blackbird's merry whistle in the grove below. Ah! they wont move, so I'll have a run this fine morning, and see how the world looks now. Perhaps when I come back they may be awake."

So Master Brush went to the entrance of his nest, which was situated at a great height from the ground, in a commodious hollow of a magnificent oak-tree.

"Oh joy!" he exclaimed, when he had looked around him for half a minute, "I see those delicious buds are beginning to sprout. Nobody can tell how I long for some fresh green food again! Nuts and acorns are all very well, but then they are terribly dry. Here goes for a leap, then!"

So saying, the active little fellow sprang from his hole, and if you had seen him, you would have thought that no animal without wings could have ventured upon such a leap without being dashed to pieces upon the ground. But Brush had nothing to fear; for though he had no wings, he knew that his beautiful bushy tail, and his legs, stretched out straight from his body, would bear him up in the air, and prevent his falling too heavily. Then he had very strong legs for his size, especially his hind legs, and his claws were so sharp and hooked, that he could skip along the boughs, without the least danger of falling off, and he could even run up and down the perpendicular trunks of trees, almost as easily as we can walk upon the level ground.

So when Brush leaped from the entrance of his hole, instead of falling to the earth, he pitched lightly upon a bough of the tree a long way below him, and ran along it for a short distance. Then he leaped to another bough still lower, from the end of which, he very easily reached the next tree, and so on, from tree to tree, till he found himself in a well-known grove of young larches, at some distance. Here he immediately fell to work, nibbling the fresh green buds and tender bark. He sat upright, as squirrels generally do when they are eating, using his fore-feet as hands to hold his food, and very pretty he looked. But I think, that, if the gamekeeper had seen him injuring the young trees, he would not have been very well pleased, and perhaps he would have put his gun to his shoulder and shot poor little Brush, if he had not received orders to the contrary....