The Squire An Original Comedy in Three Acts 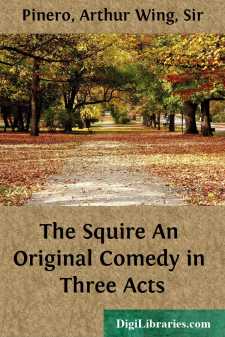 Scene:—The exterior of a decayed, weatherbeaten, Elizabethan 'mansion, overgrown with ivy and autumn-tinted creeper. On the R., the lower part of a tower, square or circular. Facing the audience, about five feet from the ground, a door opening into the tower, the entrance proper to the house. This door leads out on to a stone terrace, which is run off the stage R., and which terminates R. C., in a few broken and irregular steps. At the foot of the steps, C., of stage, an old halting stone. Below the terrace, R., a wooden garden seat. On the R., of garden seat, a small rustic table, on which is a work-basket with materials for needlework. At back, up stage, the house runs from R., to L., In R., corner, a piece of broken stonework, almost concealed by ivy, forming a footing to gain a broad beam which runs about twelve feet from the ground, from R., to L., Above the beam, two substantial casement windows, R., c. and L., Below the beams, R., C., a window, and on the L. a large archway, with broken iron gates leaning against its walls. Through the archway, a bright view of farm lands, ricks, etc., etc. On the L., continuing the house wall, down the stage, an outhouse, suggesting a kitchen dairy; outside this, up stage L., a wooden bench with milk-pails, etc. Down stage, a door leading into outhouse. Above door, L., C., rough deal table and two chairs. The ground is flagged with broken stones, which are much overgrown with moss and weed.

(Bright Music at opening. Lights full up. At riseof curtain, the bell rings in a discordant way.Christiana Haggerston discovered L., scrubbinga small wooden pail. Christiana is a handsomedark woman with the tinge of the gipsy upon herface.)Chris. What is it? (puts pail on form L., goesup into archway and looks off R.)Izod. (offstage) Hullo! Christie!Chris. Why, come in, Izod, darling—what'swrong?Izod. (R. off stage) It's the dog, he can't abideme.(Chris, hurls her scrubbing brush at the dog.)Chris. (savagely) Lie down, you beast, (softly)Come along, Izod, dear! (comes down)(Izod backs on as though afraid of dog. IzodHaggerston enters through archway. He is a littlethin, dark fellow—half cad, half gipsy—with abrown face, and crisp, curly, black hair. He isdirty and disreputable, an idler and a sneak.)(L. C.—putting her arms round his neck) I haven'tseen you for nearly a week, brother dear.Izod. (C., shaking himself clear) All right, don'tmaul, Christie. If the Squire was commonly civilto a poor chap, you'd see a little more of me. Iwant something to drink, and some coin for tobacco.Chris. (standing by him and stroking his head)No luck, dearie?Izod. Luck! No! The farmers won't look ata fellow with a dark skin—curse 'em!Chris. The brutes. (fondling him)Izod. Well, don't maul, Christie. I'm dead dry.Chris, (looking round) Wait here and I'll bringyou a drink, (she crosses to L.)(She goes into outhouse L., Izod looks roundtowards door R., C., with an evil expression....
Show more
Show less