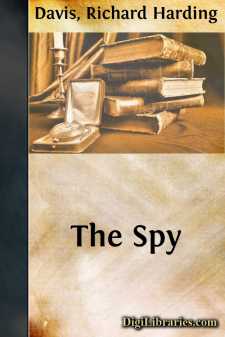 My going to Valencia was entirely an accident. But the more often I stated that fact, the more satisfied was everyone at the capital that I had come on some secret mission. Even the venerable politician who acted as our minister, the night of my arrival, after dinner, said confidentially, "Now, Mr. Crosby, between ourselves, what's the game?"

"You know what I mean," he returned. "What are you here for?"

But when, for the tenth time, I repeated how I came to be marooned in Valencia he showed that his feelings were hurt, and said stiffly: "As you please. Suppose we join the ladies."

And the next day his wife reproached me with: "I should think you could trust your own minister. My husband NEVER talks—not even to me."

And then her feelings were hurt also, and she went about telling people I was an agent of the Walker-Keefe crowd.

My only reason for repeating here that my going to Valencia was an accident is that it was because Schnitzel disbelieved that fact, and to drag the hideous facts from me followed me back to New York. Through that circumstance I came to know him, and am able to tell his story.

The simple truth was that I had been sent by the State Department to Panama to "go, look, see," and straighten out a certain conflict of authority among the officials of the canal zone. While I was there the yellow-fever broke out, and every self-respecting power clapped a quarantine on the Isthmus, with the result that when I tried to return to New York no steamer would take me to any place to which any white man would care to go. But I knew that at Valencia there was a direct line to New York, so I took a tramp steamer down the coast to Valencia. I went to Valencia only because to me every other port in the world was closed. My position was that of the man who explained to his wife that he came home because the other places were shut.

But, because, formerly in Valencia I had held a minor post in our legation, and because the State Department so constantly consults our firm on questions of international law, it was believed I revisited Valencia on some mysterious and secret mission.

As a matter of fact, had I gone there to sell phonographs or to start a steam laundry, I should have been as greatly suspected. For in Valencia even every commercial salesman, from the moment he gives up his passport on the steamer until the police permit him to depart, is suspected, shadowed, and begirt with spies.

I believe that during my brief visit I enjoyed the distinction of occupying the undivided attention of three: a common or garden Government spy, from whom no guilty man escapes, a Walker-Keefe spy, and the spy of the Nitrate Company. The spy of the Nitrate Company is generally a man you meet at the legations and clubs. He plays bridge and is dignified with the title of "agent." The Walker-Keefe spy is ostensibly a travelling salesman or hotel runner. The Government spy is just a spy—a scowling, important little beast in a white duck suit and a diamond ring. The limit of his intelligence is to follow you into a cigar store and note what cigar you buy, and in what kind of money you pay for it.

The reason for it all was the three-cornered fight which then was being waged by the Government, the Nitrate Trust, and the Walker-Keefe crowd for the possession of the nitrate beds....