The Spirit of Rome 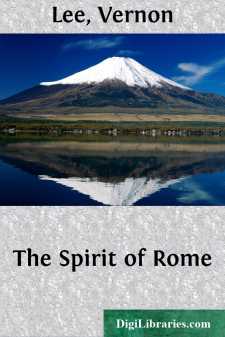 I was brought up in Rome, from the age of twelve to that of seventeen, but did not return there for many years afterwards. I discovered it anew for myself, while knowing all its sites and its details; discovered, that is to say, its meaning to my thoughts and feelings. Hence, in all my impressions, a mixture of familiarity and of astonishment; a sense, perhaps answering to the reality, that Rome—it sounds a platitude—is utterly different from everything else, and that we are therefore in different relations to it.

Probably for this reason I have found it impossible to use up, in what I have written upon places and their genius, these notes about Rome. I cannot focus Rome into any definite perspective, or see it in the colour of one mood. And whatever may have happened there to my small person has left no trace in what I have written. What I meet in Rome is Rome itself. Rome is alive (only the more so for its occasional air of death), and one is too busy loving, hating, being harassed or soothed, and ruminating over its contradictions, to remember much of the pains and joys which mere mortals have given one in its presence.

A similar reason has prevented all attempt to rewrite or alter these notes. One cannot sit down and attempt a faithful portrait of Rome; at least I cannot. And the value of these notes to those who love Rome, or are capable of loving it, is that they express, in however stammering a manner, what I said to myself about Rome; or, perhaps, if the phrase is not presumptuous, what Rome, day after day and year after year, has said to me.

THE SPIRIT OF ROME. I. FIRST RETURN TO ROME.

Strange that in the confusion of impressions, not new mainly, but oddly revived (the same things transposed by time into new keys), my most vivid impression should be of something so impersonal, so unimportant, as an antique sarcophagus serving as base to a mediæval tomb. Impressions? Scarcely. My mind seems like an old blotting-book, full of fragments of sentences, of words suggesting something, which refuses to absorb any more ink.

How I had forgotten them, and how well I know them, these little details out of the past! the darkish sponge-like holes in the travertine, the reversed capital on the Trinità dei Monti steps, the caryatides of the Stanza dell' Incendio, the scowl or smirk of the Emperors and philosophers at the Capitol: a hundred details. I seem to have been looking at nothing else these fifteen years, during which they have all been absolutely forgotten.

The very Campagna to-day, driving out beyond Cecilia Metella, little as I knew it before, seems quite familiar, leaves no impression. Yes, the fences tied like that with reeds, overtopped by sprouting elders, the fat weeds on wall and tomb, the undulations of sere green plain, the white snow-masses floating, as it were, in the blue of the sky; the straddling bits of aqueduct, the lumps of masonry. Am I utterly and for ever spoilt for this? Has it given me so much that it can never give me any more?—that the sight of Arezzo and its towers beneath the blueness and the snow of Falterona, the green marshy valley, with the full Tiber issuing from beneath the last Umbrian Mountains, seemed so much more poignant than all this. Is it possible that Rome in three days can give me nothing more vivid and heady than the thought of that sarcophagus, let into the wall of the Ara Cœli, its satyrs and cupids and grapes and peacocks surmounted by the mosaic crosses, the mediæval inscriptions of Dominus Pandulphus Sabelli...?