The Spirit of American Government A Study Of The Constitution: Its Origin, Influence And Relation To Democracy 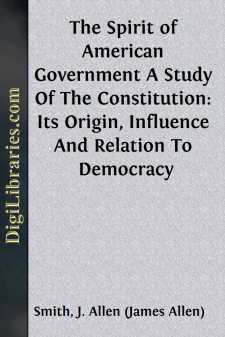 It is the purpose of this volume to trace the influence of our constitutional system upon the political conditions which exist in this country to-day. This phase of our political problems has not received adequate recognition at the hands of writers on American politics. Very often indeed it has been entirely ignored, although in the short period which has elapsed since our Constitution was framed and adopted, the Western world has passed through a political as well as an industrial revolution.

In the eighteenth century the majority was outside of the pale of political rights. Government as a matter of course was the expression of the will of a minority. Even in the United States, where hereditary rule was overthrown by the Revolution, an effective and recognized minority control still survived through the property qualifications for the suffrage and for office-holding, which excluded a large proportion of the people from participation in political affairs. Under such conditions there could be but little of what is now known as democracy. Moreover, slavery continued to exist upon a large scale for nearly three-quarters of a century after the Constitution was adopted, and was finally abolished only within the memory of many now living.

It could hardly be expected that a political system set up for a community containing a large slave population and in which the suffrage was restricted, even among the free whites, should in any large measure embody the aims and ideas of present day democracy. In fact the American Constitution did not recognize the now more or less generally accepted principle of majority rule even as applying to the qualified voters. Moreover, it was not until several decades after the Constitution was adopted that the removal of property qualifications for voting allowed the people generally to have a voice in political affairs.

The extension of the suffrage was a concession to the growing belief in democracy, but it failed to give the masses an effective control over the general government, owing to the checks in the Constitution on majority rule. It had one important consequence, however, which should not be overlooked. Possession of the suffrage by the people generally led the undiscriminating to think that it made the opinion of the majority a controlling factor in national politics.

Our political writers have for the most part passed lightly over the undemocratic features of the Constitution and left the uncritical reader with the impression that universal suffrage under our system of government ensures the rule of the majority. It is this conservative approval of the Constitution under the guise of sympathy with majority rule, which has perhaps more than any thing else misled the people as to the real spirit and purpose of that instrument. It was by constantly representing it as the indispensable means of attaining the ends of democracy, that it came to be so generally regarded as the source of all that is democratic in our system of government....