The Southern Cross A Play in Four Acts 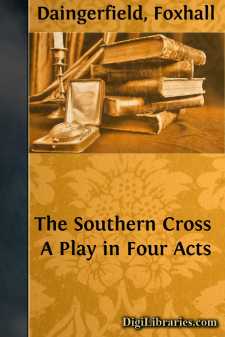 Outside the Stuart home, May, 1864. The large beautiful lawn of a typical Southern home. On the left and partly at the back stands the house, of colonial build, a wide porch running the entire length of the house, with three broad, low steps leading down to the garden. Many vines, mostly wisteria, in full bloom, cover the walls and some climb around the banisters. The porch has four white pillars reaching to the second story. On the right is a green garden bench, and at the back may be seen a road leading past the house, a low picket fence between many trees; box-bushes and shrubs are near the right. It is near twilight of an afternoon in May. On the right and through the picket fence a small gate leading to the garden and thence to the family graveyard. Over the whole scene there is a half look of decay: the grounds are not in order, the bushes are untrimmed, as though poverty had come suddenly to its occupants. At rise of curtain Aunt Marthy, an old negro mammy of the familiar Southern type, is discovered by the gate leading into the garden; in her hands she holds some roses and other flowers she has been gathering.

[Enter Cupid from the gate at back, leading into the lane. He is an old negro of about the same age as Marthy. His clothes are very old and worn, yet there is a pathetic suggestion of neatness in his ragged dress.

Marthy. I hear Miss Fair say she was gwine ter walk, and den Mars Bev say hit too far for her; dat she got ter ride de mule: and she up an tell him ef it too far fer her ter walk, she ain't gwine, 'cause it suttenly too far fer old Jack.

Cupid. And dars Mars Bev, most pester his mar to def ter let him go; but cose dat chile he too young; he ant more'n fou'teen. But den I'm frade he gwine: fer ef dat chile set his head on er thing, he good es got it.