The South and the National Government 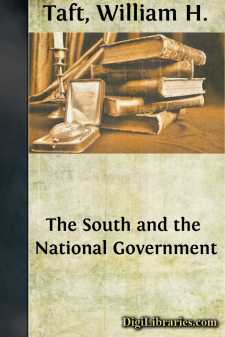 Here, if nowhere else, we leave political parties and preferences alone. But here, as everywhere else, we are patriotic men; and we North Carolinians have as our background a community that from the first showed a singularly independent temper. A freedom of opinion is our heritage. We once drove a Colonial Governor who disputed our freedom of political action to the safer shelter of the Colony of New York; and throughout our history we have shown a sort of passion for independent action, in spite of occasional eclipses; and that same temper shows itself now. We are, in fact, never sure that we are right till half our neighbors have proved that we are wrong.

We are, therefore, and have long been, much distressed by the political solidity of the states of Maine, Vermont, New Hampshire and Pennsylvania; and we wish that it were broken--not for the sake of the Democratic party nor for the sake of the Republican party (for the breach would benefit each alike) but for the sake of greater freedom of political action by our unfortunate fellow citizens who dwell there. Where one party has too long and secure power it becomes intolerant and the other party falls into contempt. Thus these states have become stagnant or corrupt. For the sake of free political action we wish that their political solidity might be broken, so that the whole conscience and character of their people might find full political expression. What constructive influence have they, or have they in recent years had, in the nation's thought and political progress?

For the same reasons we have taken an especial pleasure in the recent breaking up of Ohio, Minnesota, and Indiana--where on the same day presidential electors of one party and governors of the other party were chosen; for this breaking asunder of party dominance makes both parties tolerant and careful, helping them both and showing the utmost freedom of political action. And these states contribute much to our political life.

By the same token we rush in where Texas and Virginia fear to tread, and we shall welcome the impending and inevitable breaking of the Solid South (perhaps we shall lead it), not for the sake of the Democratic party nor for the sake of the Republican party (although it would help each party equally), but for the sake of open-mindedness and of freedom of political action, so that all men there may walk by thought and not by formulas, and act by convictions and not by traditions. Where-ever one party by long power breeds intolerance, the other falls into contempt. And what constructive influence have the Southern States in our larger political life? From some of them, where parties have fallen low, we have seen men go to one national convention as a mere unthinking personal following of a candidate even then clad in garments of twofold defeat; and to the conventions of the other party we have sometimes seen office-holding shepherds with their crooks drive their mottled flocks to market. We are tired of this political inefficiency, this long isolation, and these continued scandals; and we are tired of the conditions that produce them. If parties are to be instruments of civilized government, the conditions that produce such scandals must cease. We must have in the South a Democratic party of tolerance and a Republican party of character; and neither party must be ranged on lines of race.

We aspire to a higher part in the Republic than can be played by men of closed minds or of unthinking habits or by organized ignorance. We aspire again to a share in the constructive work of the government in these stirring days of great tasks at home and growing influence abroad....