The Sources and Analogues of 'A Midsummer-night's Dream'

by Compiled by Frank Sidgwick 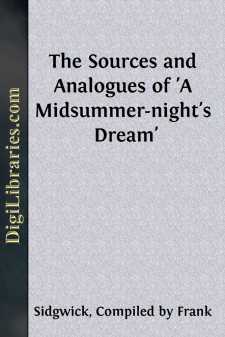 § 1. THE MAIN (SENTIMENTAL) PLOT OF THE FOUR LOVERS AND THE COURT OF THESEUS

"And out of olde bokes, in good feith,

As the play opens with speeches of Theseus and Hippolyta, it is convenient to treat first of these two characters. Mr. E.K. Chambers has collected (in Appendix D to his edition) nine passages from North's Plutarch's Life of Theseus, of which Shakespeare appears to have made direct use. For example, Oberon's references to "Perigenia," "Aegles," "Ariadne and Antiopa" (II. i. 79-80) are doubtless derived from North; and certainly the reference by Theseus to his "kinsman Hercules" (V. i. 47) is based on the following passage:—

In modern phraseology, Theseus and Hercules were thus second cousins.

Of the Amazon queen North says:—

"Touching the voyage he [Theseus] made by the sea Maior, Philochorus, and some other hold opinion, that he went thither with Hercules against the Amazons, and that to honour his valiantness, Hercules gave him Antiopa the Amazon. But the more part of the other Historiographers ... do write, that Theseus went thither alone, after Hercules' voyage, and that he took this Amazon prisoner, which is likeliest to be true."

At this point we should interpolate the reason why Hercules went against the Amazons. The ninth (as usually enumerated) of the twelve labours of Hercules was to fetch away the girdle of the queen of the Amazons, a gift from her father Ares, the god of fighting. Admete, the daughter of Eurystheus (at whose bidding the twelve labours were performed) desired this girdle, and Hercules was sent by her father to carry it off by force. The queen of the Amazons was Hippolyta, and she had a sister named Antiopa. One story says that Hercules slew Hippolyta; another that Hippolyta was enticed on board his ship by Theseus; a third, as we have seen, that Theseus married Antiopa. It is not easy to choose incidents from these conflicting accounts so as to make a reasonable sequence; but, as North says, "we are not to marvel, if the history of things so ancient, be found so diversely written." Shakespeare simply states that Theseus "woo'd" Hippolyta "with his sword." Later in the play we learn that the fairy King and Queen not only are acquainted with court-scandal, but are each involved with the past histories of Theseus and Hippolyta (II. i. 70-80).

Apart from these incidents in Theseus' life, Chaucer supplies the dramatist with all he requires in the opening of The Knightes Tale, which we shall discuss in full shortly.

"Whylom, as olde stories tellen us,

Ther was a duke that highte Theseus;

Of Athenes he was lord and governour,

And in his tyme swich a conquerour,

That gretter was ther noon under the sonne.

Ful many a riche contree hadde he wonne;

What with his wisdom and his chivalrye,

He conquered al the regne of Femenye,