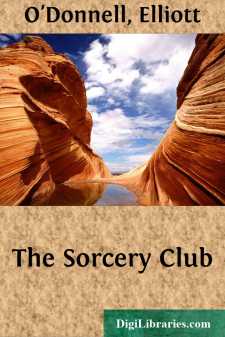 CHAPTER I HOW THEY FIRST HEARD OF ATLANTIS

Rain is responsible for a great deal more than the mere growth of vegetables—it is a controller, if a somewhat capricious controller, of man's destiny. It was mainly, if not entirely, owing to rain that the French lost the Battle of Agincourt; whilst, if I mistake not, Confucius alone knows how many victories have been snatched from the Chinese by the same factor.

It was most certainly rain that drove Leon Hamar to take refuge in a second-hand bookshop; for so deep-rooted was his aversion to any literature saving a financial gazette or the stock and shares column of a daily, that nothing would have induced him to get within touching distance of a book save the risk of a severe wetting. Now, to his unutterable disgust, he found himself surrounded by the things he loathed. Books ancient—very ancient, judging by their bindings—and modern—histories, biographies, novels and magazines—anything from ten dollars to five cents, and all arrayed with most laudable tact according to their bulk and condition. But Hamar was neither to be tempted nor mollified. He frowned at one and all alike, and the colossal edition of Miss Somebody or Other's poems—that by reason of its magnificent cover of crimson and gold occupied a most prominent position—met with the same vindictive reception as the tattered and torn volumes of Whittier stowed away in an obscure corner.

Backing still further into the entrance of the store for a better protection from the rain, which, now falling heavier and heavier, was blown in by the wind, Hamar collided with a stand of books, with the result that one of them fell with a loud bang on the pavement.

A man, evidently the owner of the store, and unmistakably a Jew, instantly appeared. Picking up the book, and wiping it with a dirty handkerchief, he thrust it at Hamar.

"See!" he said, "you have damaged this property of mine. You must either buy it or give me adequate compensation."

"What!" Hamar cried, "compensation for such rubbish as that? Why all your books together are not worth five dollars. Indeed I've seen twice as many sold at a sale for half that amount. You can't Jew me!"

The two men eyed each other quizzically.

"Perhaps," the owner of the store observed slowly, "perhaps some of your ancestors were once Yiddish. In which case there ought to be a bond of sympathy between us. You may have that book for a nickel. What, no! Your cheeks are hollow, your fingers thin. A nickel is too much for you. I will take your chain in exchange."

"And leave me the watch!" Hamar retorted, with a grim smile. "You are a philanthropist—not a storekeeper."

"I should leave you nothing!" the Jew laughed.

"There's no watch there! See!" and he pointed to the concave surface of the watch-pocket. "I noticed its absence at once. It's been keeping you alive for some days past. I'll give you four dollars on the chain—and you may have the book!"

"The book's no good to me!" Hamar grunted. "The money is. Here! hand me over the four dollars and you can have the chain....