The Song of Sixpence Picture Book 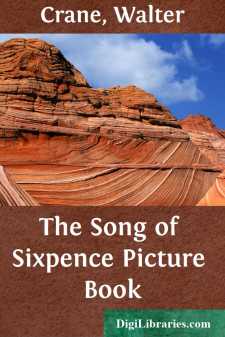 Once upon a time there were three Princesses, named Roussette, Brunette, and Blondine, who lived in retirement with their mother, a Princess who had lost all her former grandeur. One day an old woman called and asked for a dinner, as this Princess was an excellent cook. After the meal was over, the old woman, who was a fairy, promised that their kindness should be rewarded, and immediately disappeared.

The good Fairy, who had brought all this about, also caused the young Queen Blondine to have three lovely children, two boys and a girl, out of whose hair fell fine jewels. Each had a brilliant star on the forehead, and a rich chain of gold around the neck. At the same time Brunette, her sister, gave birth to a handsome boy. Now the young Queen and Brunette were much attached to each other, but Roussette was jealous of both, and the old Queen, the King's mother, hated them. Brunette died soon after the birth of her son, and the King was absent on a warlike expedition, so Roussette joined the wicked old Queen in forming plans to injure Blondine. They ordered Feintise, the old Queen's waiting-woman, to strangle the Queen's three children and the son of Princess Brunette, and bury them secretly. But as she was about to execute this wicked order, she was so struck by their beauty, and the appearance of the sparkling stars on their foreheads, that she shrank from the deed.

So she had a boat brought round to the beach, and put the four babes, with some strings of jewels, into a cradle, which she placed in the boat, and then set it adrift. The boat was soon far out at sea. The waves rose, the rain poured in torrents, and the thunder roared. Feintise could not doubt that the boat would be swamped, and felt relieved by the thought that the poor little innocents would perish, for she would otherwise always be haunted by the fear that something would occur to betray the share she had had in their preservation.

But the good Fairy protected them, and after floating at sea for seven days they were picked up by a Corsair. He was so struck by their beauty that he altered his course, and took them home to his wife, who had no children. She was transported with joy when he placed them in her hands. They admired together the wonderful stars, the chains of gold that could not be taken off their necks, and their long ringlets. Much greater was the woman's astonishment when she combed them, for at every instant there rolled out of their hair pearls, rubies, diamonds, and emeralds. She told her husband of it, who was not less surprised than herself.

"I am very tired," said he, "of a Corsair's life, and if the locks of those little children continue to supply us with such treasures, I will give up roaming the seas." The Corsair's wife, whose name was Corsine, was enchanted at this, and loved the four infants so much the more for it....