The Son of the Wolf 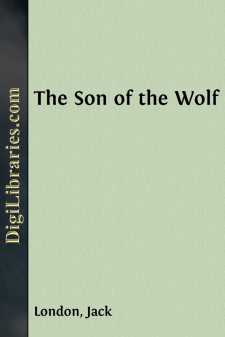 'Carmen won't last more than a couple of days.' Mason spat out a chunk of ice and surveyed the poor animal ruefully, then put her foot in his mouth and proceeded to bite out the ice which clustered cruelly between the toes.

'I never saw a dog with a highfalutin' name that ever was worth a rap,' he said, as he concluded his task and shoved her aside. 'They just fade away and die under the responsibility. Did ye ever see one go wrong with a sensible name like Cassiar, Siwash, or Husky? No, sir! Take a look at Shookum here, he's—' Snap! The lean brute flashed up, the white teeth just missing Mason's throat.

'Ye will, will ye?' A shrewd clout behind the ear with the butt of the dog whip stretched the animal in the snow, quivering softly, a yellow slaver dripping from its fangs.

'As I was saying, just look at Shookum here—he's got the spirit. Bet ye he eats Carmen before the week's out.' 'I'll bank another proposition against that,' replied Malemute Kid, reversing the frozen bread placed before the fire to thaw. 'We'll eat Shookum before the trip is over. What d'ye say, Ruth?' The Indian woman settled the coffee with a piece of ice, glanced from Malemute Kid to her husband, then at the dogs, but vouchsafed no reply. It was such a palpable truism that none was necessary. Two hundred miles of unbroken trail in prospect, with a scant six days' grub for themselves and none for the dogs, could admit no other alternative. The two men and the woman grouped about the fire and began their meager meal. The dogs lay in their harnesses for it was a midday halt, and watched each mouthful enviously.

'No more lunches after today,' said Malemute Kid. 'And we've got to keep a close eye on the dogs—they're getting vicious. They'd just as soon pull a fellow down as not, if they get a chance.' 'And I was president of an Epworth once, and taught in the Sunday school.' Having irrelevantly delivered himself of this, Mason fell into a dreamy contemplation of his steaming moccasins, but was aroused by Ruth filling his cup.

'Thank God, we've got slathers of tea! I've seen it growing, down in Tennessee. What wouldn't I give for a hot corn pone just now! Never mind, Ruth; you won't starve much longer, nor wear moccasins either.' The woman threw off her gloom at this, and in her eyes welled up a great love for her white lord—the first white man she had ever seen—the first man whom she had known to treat a woman as something better than a mere animal or beast of burden.

'Yes, Ruth,' continued her husband, having recourse to the macaronic jargon in which it was alone possible for them to understand each other; 'wait till we clean up and pull for the Outside. We'll take the White Man's canoe and go to the Salt Water. Yes, bad water, rough water—great mountains dance up and down all the time. And so big, so far, so far away—you travel ten sleep, twenty sleep, forty sleep'—he graphically enumerated the days on his fingers—'all the time water, bad water. Then you come to great village, plenty people, just the same mosquitoes next summer....