The Soldier Boy; or, Tom Somers in the Army A Story of the Great Rebellion 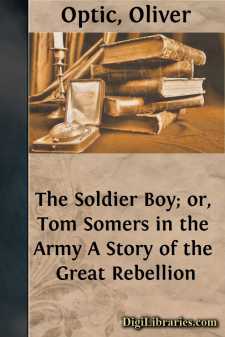 Chapter I. The Battle of Pinchbrook.

“Fort Sumter has surrendered, mother!” shouted Thomas Somers, as he rushed into the room where his mother was quietly reading her Bible.

It was Sunday, and the exciting news had been circulated about the usually quiet village of Pinchbrook Harbor. Men’s lips were compressed, and their teeth shut tight together. They were indignant, for traitors had fired upon the flag of the United States. Men, women, and children were roused by the indignity offered to the national emblem. The cannon balls that struck the walls of Sumter seemed at the same time to strike the souls of the whole population of the North, and never was there such a great awakening since the Pilgrim Fathers first planted their feet upon the rock of Plymouth.

“Fort Sumter has surrendered!” shouted the indignant young patriot again, as his mother looked up from the blessed volume.

“You don’t say so!” exclaimed Mrs. Somers, as she closed the Bible, and removed her spectacles.

“Yes, mother. The infernal rebels hammered away at the fort for two days, and at last we had to give in.”

“The President has called for seventy-five thousand volunteers, and I tell you there’ll be music before long!” continued the youth, so excited that he paced the room with rapid strides.

“What’s the matter, Thomas?” asked a feeble old gentleman, entering the room at this moment.

“Fort Sumter has surrendered, gran’ther,” repeated Thomas, at the top of his lungs, for the aged man was quite deaf; “and the President has called for seventy-five thousand men to go down and fight the traitors.”

“Sho!” exclaimed the old man, halting, and gazing with earnestness into the face of the boy.

“How old were you, gran’ther, when you went to the war?” asked Thomas, with more moderation than he had exhibited before.

“Only sixteen, Thomas; but I was as tall as I am now,” replied the patriarch, dropping slowly and cautiously into the old-fashioned high-back chair, by the side of the cooking stove.

“You, Thomas! You are crazy! You shan’t do any thing of the kind,” interposed Mrs. Somers. “There’s men enough to go to the war, without such boys as you are.”

“You ain’t quite stout enough to make a soldier, Thomas. You ain’t so big as I was, when I went off to York state,” added gran’ther Greene.

“I should like to go any how,” said Thomas, as he seated himself in a corner of the room, and began to think thoughts big enough for a full-grown man.

“Fort Sumter has surrendered,” shouted John Somers, rushing into the house as much excited as his brother had been....