The Social Emergency Studies in Sex Hygiene and Morals 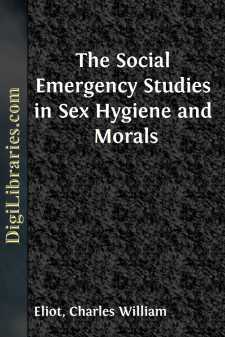 This book is a collection of essays by several authors on the various aspects of social hygiene, and on the proper means of forming an enlightened public opinion concerning the measures which society can now, at last, wisely undertake against the vices and evils which in the human race accompany bodily self-indulgence and lack of moral stamina.

Till within five years, it was the custom in families, churches, and schools, to say nothing about sex relations, normal or abnormal; and in society at large to do nothing about the ancient evil of prostitution, to provide neither isolation nor treatment for the worst of contagious diseases, and to regard the blindness, feeble-mindedness, sterility, paralysis, and insanity which result from those diseases as afflictions which could not be prevented. The progress of medicine within twenty years, both preventive and curative, has greatly changed the ethical as well as the physical situation. The policy of silence and concealment concerning evils which are now known to be preventable is no longer justifiable. The thinking public can now learn what these evils are, how destructive they are, and by what measures they may be cured or prevented. With this knowledge goes the responsibility and duty of applying it in defense of society and civilization.

This book is a sincere effort, first, to supply the needed knowledge of terrible wrongs and destructions; and, secondly, to indicate cautiously and tentatively the most available means of attacking the evils described. It is an attempt to enlighten public opinion on one of the gravest of modern problems—indeed, the very gravest, with the exception of the warfare between capital and labor. The book is not intended for children, or even for adolescents, but rather for parents, teachers, and ministers who have to answer the questions of children and youth about sex relations, or deal sympathetically with the victims of sexual vice.

All efforts to deal directly with sex relations in schools, churches, and clubs are hampered, and must be for some years to come, by the lack of competent instructors in that difficult subject. So far as instruction in educational institutions is concerned, it seems as if the normal schools and the colleges for men or for women must be selected for the first experiments on class instruction. Family instruction is in most cases impossible; because neither father nor mother is competent to teach the children what needs to be taught about both the normal and the disordered sex relations. The ministers and priests are as a rule equally incompetent. They can give precepts or orders, but not explanations or reasons. Considerate managers of large industries ought to have a keen interest in all social hygiene problems, because they nearly concern industrial efficiency; but it is only lately that business men have begun to understand the close connection between public health and industrial prosperity, and most of them are not well informed on the subject.

Against prostitution and drunkenness governments of many sorts have been struggling ineffectually for centuries. These two evils go together; but whether taken separately or together no government has yet adopted an effective mode of dealing with them. Fortunately medical science has lately placed in the hands of government, and of private associations, effective means of defense against the social vices and their consequences; and the new social ethics call loudly on all men of good will to enlist in the warfare against these ancient evils, which to-day are more destructive than ever before, because of the prevailing industrial and social freedom, and the new facilities for individual traveling, and the migration of masses of men.