The Smoky God, or, a voyage to the inner world 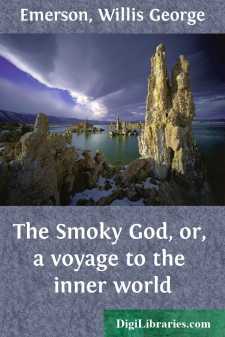 Add to My Favorites
Published: 10 years ago
Downloads: 80
Rating: (0 Votes)

I FEAR the seemingly incredible story which I am about to relate will be regarded as the result of a distorted intellect superinduced, possibly, by the glamour of unveiling a marvelous mystery, rather than a truthful record of the unparalleled experiences related by one Olaf Jansen, whose eloquent madness so appealed to my imagination that all thought of an analytical criticism has been effectually dispelled.

Marco Polo will doubtless shift uneasily in his grave at the strange story I am called upon to chronicle; a story as strange as a Munchausen tale. It is also incongruous that I, a disbeliever, should be the one to edit the story of Olaf Jansen, whose name is now for the first time given to the world, yet who must hereafter rank as one of the notables of earth.

I freely confess his statements admit of no rational analysis, but have to do with the profound mystery concerning the frozen North that for centuries has claimed the attention of scientists and laymen alike.

However much they are at variance with the cosmographical manuscripts of the past, these plain statements may be relied upon as a record of the things Olaf Jansen claims to have seen with his own eyes.

A hundred times I have asked myself whether it is possible that the world's geography is incomplete, and that the startling narrative of Olaf Jansen is predicated upon demonstrable facts. The reader may be able to answer these queries to his own satisfaction, however far the chronicler of this narrative may be from having reached a conviction. Yet sometimes even I am at a loss to know whether I have been led away from an abstract truth by the ignes fatui of a clever superstition, or whether heretofore accepted facts are, after all, founded upon falsity.

It may be that the true home of Apollo was not at Delphi, but in that older earth-center of which Plato speaks, where he says: "Apollo's real home is among the Hyperboreans, in a land of perpetual life, where mythology tells us two doves flying from the two opposite ends of the world met in this fair region, the home of Apollo. Indeed, according to Hecataeus, Leto, the mother of Apollo, was born on an island in the Arctic Ocean far beyond the North Wind."

It is not my intention to attempt a discussion of the theogony of the deities nor the cosmogony of the world. My simple duty is to enlighten the world concerning a heretofore unknown portion of the universe, as it was seen and described by the old Norseman, Olaf Jansen.

Interest in northern research is international. Eleven nations are engaged in, or have contributed to, the perilous work of trying to solve Earth's one remaining cosmological mystery.

There is a saying, ancient as the hills, that "truth is stranger than fiction," and in a most startling manner has this axiom been brought home to me within the last fortnight.

It was just two o'clock in the morning when I was aroused from a restful sleep by the vigorous ringing of my door-bell. The untimely disturber proved to be a messenger bearing a note, scrawled almost to the point of illegibility, from an old Norseman by the name of Olaf Jansen....