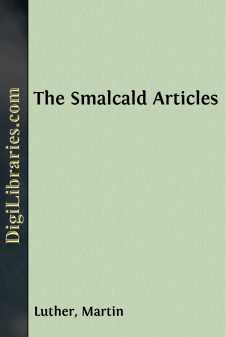 Since Pope Paul III convoked a Council last year, to assemble at Mantua about Whitsuntide, and afterwards transferred it from Mantua, so that it is not yet known where he will or can fix it, and we on our part either had to expect that we would be summoned also to the Council or [to fear that we would] be condemned unsummoned, I was directed to compile and collect the articles of our doctrine [in order that it might be plain] in case of deliberation as to what and how far we would be both willing and able to yield to the Papists, and in what points we intended to persevere and abide to the end.

I have accordingly compiled these articles and presented them to our side. They have also been accepted and unanimously confessed by our side, and it has been resolved that, in case the Pope with his adherents should ever be so bold as seriously and in good faith, without lying and cheating, to hold a truly free [legitimate] Christian Council (as, indeed, he would be in duty bound to do), they be publicly delivered in order to set forth the Confession of our Faith.

But though the Romish court is so dreadfully afraid of a free Christian Council, and shuns the light so shamefully, that it has [entirely] removed, even from those who are on its side, the hope that it will ever permit a free Council, much less that it will itself hold one, whereat, as is just, they [many Papists] are greatly offended and have no little trouble on that account [are disgusted with this negligence of the Pope], since they notice thereby that the Pope would rather see all Christendom perish and all souls damned than suffer either himself or his adherents to be reformed even a little, and his [their] tyranny to be limited, nevertheless I have determined meanwhile to publish these articles in plain print, so that, should I die before there would be a Council (as I fully expect and hope, because the knaves who flee the light and shun the day take such wretched pains to delay and hinder the Council), those who live and remain after me may have my testimony and confession to produce, in addition to the Confession which I have issued previously, whereby up to this time I have abided, and, by God's grace, will abide.

For what shall I say? How shall I complain? I am still living, writing, preaching, and lecturing daily; [and] yet there are found such spiteful men, not only among the adversaries, but also false brethren that profess to be on our side, as dare to cite my writings and doctrine directly against myself, and let me look on and listen, although they know well that I teach otherwise, and as wish to adorn their venom with my labor, and under my name to [deceive and] mislead the poor people. [Good God!] Alas! what first will happen when I am dead?

Indeed, I ought to reply to everything while I am still living. But, again, how can I alone stop all the mouths of the devil? especially of those (as they all are poisoned) who will not hear or notice what we write, but solely exercise themselves with all diligence how they may most shamefully pervert and corrupt our word in every letter....