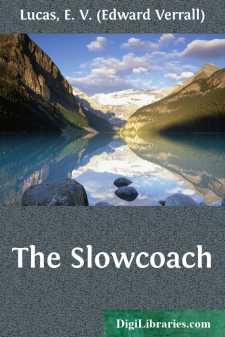 Once upon a time there was a nice family. Its name was Avory, and it lived in an old house in Chiswick, where the Thames is so sad on grey days and so gay on sunny ones.

Mr.—or rather Captain—Avory was dead; he had been wounded at Spion Kop, and died a few years after. Mrs. Avory was thirty-five, and she had four children. The eldest was Janet, aged fourteen, and the youngest was Gregory Bruce, aged seven. Between these came Robert Oliver, who was thirteen, and Hester, who was nine.

They were all very fond of each other, and they rarely quarreled. (If they had done so, I should not be telling this story. You don't catch me writing books about people who quarrel.) They adored their mother.

The name of the Avories' house was "The Gables," which was a better name than many houses have, because there actually were gables in its roof. Hester, who had funny ideas, wanted to see all the people who lived in all the houses that are called "The Gables" everywhere drawn up in a row so that she might examine them. She used to lie awake at night and wonder how many there would be. "I'm sure mother would be the most beautiful, anyway," she used to say.

History was Hester's passion. She could read history all day. Here she differed from Robert Oliver, who was all for geography. Their friends knew of these tastes, of course, and so Hester's presents were nearly always history books or portraits of great men, such as Napoleon and Shakespeare, both of whom she almost worshipped, while Robert's were compasses and maps. He also had a mapmeasurer (from Mr. Lenox), and at the moment at which this story opens, his birthday being just over, he was the possessor of a pedometer, which he carried fastened to his leg, under his knickerbockers, so that it was certain to register every time he took a step. He kept a careful record of the distance he had walked since his birthday, and could tell you at any time what it was, if you gave him a minute or two to crawl under the table and undo his clothes. He could be heard grunting in dark places all day long, having been forbidden by Janet to undress in public.

Robert's birthday was on June 20, Hester's on November 8, and Janet's on February 28. She had the narrowest escape, you see, of getting birthdays only once in every four years; which is one of the worst things that can happen to a human being. Gregory Bruce was a little less lucky, for his birthday was on December 20, which is so near to Christmas Day that mean persons have been known to make one gift do for both events. None the less, Gregory's possessions were very numerous; for he had many friends, and most of them were careful to keep these two great anniversaries apart.

Gregory's particular passion just now was the names of engines, of which he had one of the finest collections in Europe; but a model aeroplane which Mr. Scott had given him was beginning to turn his thoughts towards the conquest of the air, and whereas he used to tell people that he meant to be an engine driver when he grew up, he was now adding, "or a man like Wilbur Wright."

Most children have wanted to fly ever since "Peter Pan" began, and, as I dare say you have heard, some have tried from the nursery window, with perfectly awful results, having neglected to have their shoulders first touched magically; but Gregory Bruce Avory wanted to fly in a more regular and scientific manner....