The slave trade, domestic and foreign Why It Exists, and How It May Be Extinguished 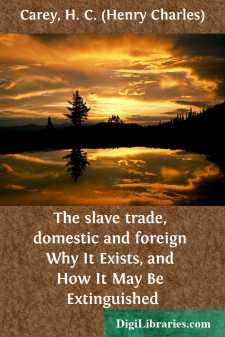 CHAPTER I. THE WIDE EXTENT OF SLAVERY.

Slavery still exists throughout a large portion of what we are accustomed to regard as the civilized world. In some countries, men are forced to take the chance of a lottery for the determination of the question whether they shall or shall not be transported to distant and unhealthy countries, there most probably to perish, leaving behind them impoverished mothers and sisters to lament their fate. In others, they are seized on the highway and sent to sea for long terms of years, while parents, wives, and sisters, who had been dependent on their exertions, are left to perish of starvation, or driven to vice or crime to procure the means of support. In a third class, men, their wives, and children, are driven from their homes to perish in the road, or to endure the slavery of dependence on public charity until pestilence shall Send them to their graves, and thus clear the way for a fresh supply of others like themselves. In a fourth, we see men driven to selling themselves for long periods at hard labour in distant countries, deprived of the society of parents, relatives, or friends. In a fifth, men, women, and children are exposed to sale, and wives are separated from husbands, while children are separated from parents. In some, white men, and, in others, black men, are subjected to the lash, and to other of the severest and most degrading punishments. In some places men are deemed valuable, and they are well fed and clothed. In others, man is regarded as "a drug" and population as "a nuisance;" and Christian men are warned that their duty to God and to society requires that they should permit their fellow-creatures to suffer every privation and distress, short of "absolute death," with a view to prevent the increase of numbers.

Among these various classes of slaves, none have recently attracted so much attention as those of the negro race; and it is in reference to that race in this country that the following paper has recently been circulated throughout England:—

"The affectionate and Christian Address of many thousands of the Women of England to their Sisters, the Women of the United States of America:

"A common origin, a common faith, and, we sincerely believe, a common cause, urge us at the present moment to address you on the subject of that system of negro slavery which still prevails so extensively, and, even under kindly-disposed masters, with such frightful results, in many of the vast regions of the Western World.

"We will not dwell on the ordinary topics—on the progress of civilization; on the advance of freedom everywhere; on the rights and requirements of the nineteenth century;—but we appeal to you very seriously to reflect, and to ask counsel of God, how far such a state of things is in accordance with His holy word, the inalienable rights of immortal souls, and the pure and merciful spirit of the Christian religion.

"We do not shut our eyes to the difficulties, nay, the dangers, that might beset the immediate abolition of that long-established system: we see and admit the necessity of preparation for so great an event....