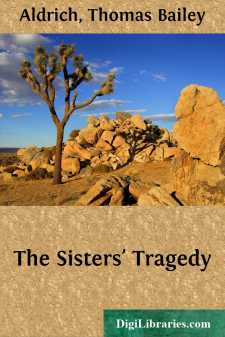 IT happened once, in that brave land that lies  For half the twelvemonth wrapt in sombre skies,  Two sisters loved one man. He being dead,  Grief loosed the lips of her he had not wed,  And all the passion that through heavy years  Had masked in smiles unmasked itself in tears.  No purer love may mortals know than this,  The hidden love that guards another's bliss.  High in a turret's westward-facing room,  Whose painted window held the sunset's bloom,  The two together grieving, each to each  Unveiled her soul with sobs and broken speech.

Both still were young, in life's rich summer yet;  And one was dark, with tints of violet  In hair and eyes, and one was blond as she  Who rose—a second daybreak—from the sea,  Gold-tressed and azure-eyed. In that lone place,  Like dusk and dawn, they sat there face to face.

She spoke the first whose strangely silvering hair  No wreath had worn, nor widow's weed might wear,  And told her blameless love, and knew no shame—  Her holy love that, like a vestal flame  Beside the sacred body of some queen  Within a guarded crypt had burned unseen  From weary year to year. And she who heard  Smiled proudly through her tears and said no word,  But, drawing closer, on the troubled brow  Laid one long kiss, and that was words enow!

Be still, my heart! Grown patient with thine ache,  Thou shouldst be dumb, yet needs must speak, or break.  The world is empty now that he is gone.

None was like him, no, not one.  From other men he stood apart, alone  In honor spotless as unfallen snow.  Nothing all evil was it his to know;  His charity still found some germ, some spark  Of light in natures that seemed wholly dark.  He read men's souls; the lowly and the high  Moved on the self-same level in his eye.  Gracious to all, to none subservient,  Without offence he spake the word he meant—  His word no trick of tact or courtly art,  But the white flowering of the noble heart.  Careless he was of much the world counts gain,  Careless of self, too simple to be vain,  Yet strung so finely that for conscience-sake  He would have gone like Cranmer to the stake.  I saw—how could I help but love? And you—

At this perfection did I worship too . . .  'Twas this that stabbed me. Heed not what I say!  I meant it not, my wits are gone astray,  With all that is and has been. No, I lie—  Had he been less perfection, happier I!

Strange words and wild! 'Tis the distracted mind  Breathes them, not you, and I no meaning find.

Yet 'twere as plain as writing on a scroll  Had you but eyes to read within my soul.—  How a grief hidden feeds on its own mood,  Poisons the healthful currents of the blood  With bitterness, and turns the heart to stone...!