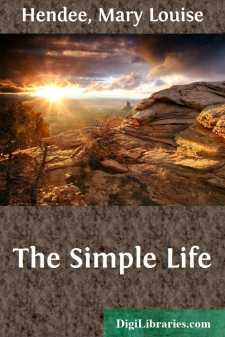 AT the home of the Blanchards, everything is topsy-turvy, and with reason. Think of it! Mlle. Yvonne is to be married Tuesday, and to-day is Friday!

Callers loaded with gifts, and tradesmen bending under packages, come and go in endless procession. The servants are at the end of their endurance. As for the family and the betrothed, they no longer have a life or a fixed abode. Their mornings are spent with dressmakers, milliners, upholsterers, jewelers, decorators, and caterers. After that, comes a rush through offices, where one waits in line, gazing vaguely at busy clerks engulfed in papers. A fortunate thing, if there be time when this is over, to run home and dress for the series of ceremonial dinners—betrothal dinners, dinners of presentation, the settlement dinner, receptions, balls. About midnight, home again, harassed and weary, to find the latest accumulation of parcels, and a deluge of letters—congratulations, felicitations, acceptances and regrets from bridesmaids and ushers, excuses of tardy tradesmen. And the contretemps of the last minute—a sudden death that disarranges the bridal party; a wretched cold that prevents a favorite cantatrice from singing, and so forth, and so forth. Those poor Blanchards! They will never be ready, and they thought they had foreseen everything!

Such has been their existence for a month. No longer possible to breathe, to rest a half-hour, to tranquillize one's thoughts. No, this is not living!

Mercifully, there is Grandmother's room. Grandmother is verging on eighty. Through many toils and much suffering, she has come to meet things with the calm assurance which life brings to men and women of high thinking and large hearts. She sits there in her arm-chair, enjoying the silence of long meditative hours. So the flood of affairs surging through the house, ebbs at her door. At the threshold of this retreat, voices are hushed and footfalls softened; and when the young fiancés want to hide away for a moment, they flee to Grandmother.

"Poor children!" is her greeting. "You are worn out! Rest a little and belong to each other. All these things count for nothing. Don't let them absorb you, it isn't worth while."

They know it well, these two young people. How many times in the last weeks has their love had to make way for all sorts of conventions and futilities! Fate, at this decisive moment of their lives, seems bent upon drawing their minds away from the one thing essential, to harry them with a host of trivialities; and heartily do they approve the opinion of Grandmamma when she says, between a smile and a caress:

"Decidedly, my dears, the world is growing too complex; and it does not make people happier—quite the contrary!"

I ALSO, am of Grandmamma's opinion. From the cradle to the grave, in his needs as in his pleasures, in his conception of the world and of himself, the man of modern times struggles through a maze of endless complication. Nothing is simple any longer: neither thought nor action; not pleasure, not even dying. With our own hands we have added to existence a train of hardships, and lopped off many a gratification. I believe that thousands of our fellow-men, suffering the consequences of a too artificial life, will be grateful if we try to give expression to their discontent, and to justify the regret for naturalness which vaguely oppresses them.

Let us first speak of a series of facts that put into relief the truth we wish to show.

The complexity of our life appears in the number of our material needs. It is a fact universally conceded, that our needs have grown with our resources. This is not an evil in itself; for the birth of certain needs is often a mark of progress. To feel the necessity of bathing, of wearing fresh linen, inhabiting wholesome houses, eating healthful food, and cultivating our minds, is a sign of superiority. But if certain needs exist by right, and are desirable, there are others whose effects are fatal, which, like parasites, live at our expense: numerous and imperious, they engross us completely....