The Silver Lining A Guernsey Story 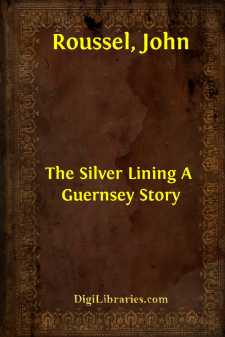 CHAPTER I. The Results of Disobedience.

ne fine summer afternoon—it was the month of June—the sea was calm, the air was still, and the sun was warm.

The mackerel boats from Cobo (a bay in the island of Guernsey) were setting sail; an old woman was detaching limpets from the rocks, and slowly, but steadily, filling up her basket. On the west side of the bay, two air-starved Londoners were sitting on the sand, basking in the sunshine, determined to return home, if not invigorated, at least bronzed by the sea air. On the east side, a few little boys were bathing. A middle-aged man, engaged in searching for sand-eels, completed the picture.

A little boy, who might have been nine years of age, was standing in the road gazing upon this scene. The way in which he was clothed, betokened that he was not one of the lads that lived in the vicinity of that bay. He was dressed in a well-fitting knickerbocker suit, and his polished boots, his well combed hair, denoted that he was an object of especial care at home. He possessed a very intelligent air, a fine forehead, rather large eyes which were full of expression, and his frowning look, the way in which he stamped his little foot, denoted that he was of an impulsive temperament. This little fellow had some very good ideas. He had determined to be good, and unselfish; and he tried to learn as much as he possibly could. His mother had told him that later on this would help him in life.

Once, an inquisitive pedlar, noticing his intelligence, and his garrulous disposition, asked him jokingly if he ever intended to marry. Upon which Frank Mathers (this was the boy's name) assumed a serious air, and giving his head a little toss he answered, "I do not know yet, there are so many beautiful little girls everywhere, one does not know which one to choose."

A physiognomist might easily have seen that in this little boy's soul a struggle was going on. "Shall I go?" he was saying to himself; "shall I go and amuse myself?" His conscience had a great power over him; but the beautiful sea was tempting, each wave as it fell produced a sound which was sweeter to his ears than the sweetest music.

"Your mother has forbidden you to go;" said his conscience; "you must obey her."

He continued to remain undecided between pleasure and duty, the strife going on meanwhile within him. All at once, he espied on his extreme left four small boys about his size, who were coming out of the water. How they laughed; how joyful they seemed to be; how they made the water splash and foam around them. Frank immediately began to run at full speed towards them, and covered the space of sand which separated him from the little boys in two minutes. He arrived breathless near the group of children who were dressing themselves. He looked at them, and was asking himself if he must go nearer to them, when one of the group looked at him with a surly air. Little Frank translated this into: "What business have you here?" and retreated.

He began to examine the man who was looking for sand-eels....