The Silver Crown Another Book of Fables 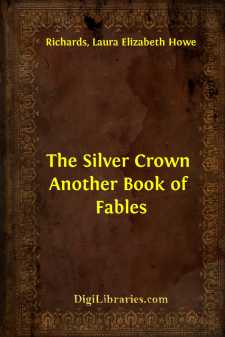 "You shall surely wear a crown," said the Angel, "and a kingdom is waiting for you."

"Oh, joy!" said the child. "But tell me, how will it come about? for now I am only a little child, and the crown would hardly stay on my curls."

"Nay! that I may not tell," said the Angel. "Only ride and run your best, for the way is long to your kingdom, and the time short."

So the child rode and ran his best, crossing hills and valleys, broad streams and foaming torrents. Here and there he saw people at work or at play, and on these he looked eagerly.

"Perhaps, when they see me," he said, "they will run to meet me, and will crown me with a golden crown, and lead me to their palace and throne me there as king!"

But the folk were all busy with their tasks or their sport, and none heeded him, or left their business for him; and still he must fare forward alone, for the Way called him.

Also, he came upon many travellers like himself, some coming toward him, others passing him by. On these, too, he looked earnestly, and would stop now one, now another, and question him.

"Do you know," he asked, "of any kingdom in these parts where the crown is ready and the folk wait for a king?"

"I am seeking crown and kingdom for myself," cried one; "is it likely that I can be finding one for you, too? Each one for himself, and the Way for all!"

Another said: "You seek in vain. There are no crowns, only fools' caps with asses' ears and bells that jingle in them."

But others, and these they who had been longest on the way, only looked on him, some sadly, some kindly, and made no answer; and still he fared onward, for the Way called him.

Now and then he stopped to help some poor soul who had fallen into trouble, and when he did that the way lightened before him, and he felt the heart light within him; but at other times the hurry was strong on him, so that he would turn away his face, and shut his ears to the cries that rang in them; and when he did that, the way darkened, and oftentimes he stumbled himself, and fell into pits and quagmires, and must cry for help, sometimes on those to whom he had refused it.

By and by he forgot about the crown and the kingdom; or if he thought of them, it was but as a far-off dream of dim gold, such as one sees at morning when the sun breaks through the mist. But still he knew that the way was long and the time short, and still he rode and ran his best.

At the last he was very weary, and his feet could carry him no further, when, looking up, he saw that the way came to an end before him, and there was a gate, and one in white sitting by it, who beckoned to him. Trembling, yet glad, the child drew near, and knew the Angel who had spoken to him at the beginning.

"Welcome!" said the Angel, "you come in good time. And what of the Way?"

"I came as fast as I could," said the child, "but many things hindered me, and now I am weary, and can go no further."