The Silver Canyon A Tale of the Western Plains 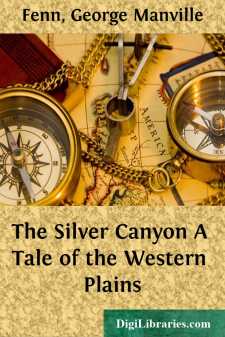 Add to My Favorites
Published: 9 years ago
Downloads: 86
Rating: (0 Votes)

How they decided to run the Risk.

“Well, Joses,” said Dr Lascelles, “if you feel afraid, you had better go back to the city.”

There was a dead silence here, and the little party grouped about between a small umbrella-shaped tent and the dying embers of the fire, at which a meal of savoury antelope steaks had lately been cooked, carefully avoided glancing one at the other.

Just inside the entrance of the tent, a pretty, slightly-made girl of about seventeen was seated, busily plying her needle in the repair of some rents in a pair of ornamented loose leather leggings that had evidently been making acquaintance with some of the thorns of the rugged land. She was very simply dressed, and, though wearing the high comb and depending veil of a Spanish woman, her complexion, tanned is it was, and features, suggested that she was English, as did also the speech of the fine athletic middle-aged man who had just been speaking.

His appearance, too, was decidedly Spanish, for he wore the short jacket with embroidered sleeves, tight trousers—made very wide about the leg and ankle-sash, and broad sombrero of the Mexican-Spanish inhabitant of the south-western regions of the great American continent.

The man addressed was a swarthy-looking half-breed, who lay upon the parched earth, his brow rugged, his eyes half-closed, and lips pouted out in a surly, resentful way, as if he were just about to speak and say something nasty.

Three more men of a similar type were lying beside and behind, all smoking cigarettes, which from time to time they softly rolled up and lighted with a brand at the fire, as they seemed to listen to the conversation going on between the bronzed Englishman and him who had been addressed as Joses.

They were all half-breeds, and boasted of their English blood, but always omitted to say anything about the Indian fluid that coursed through their veins; while they followed neither the fashion of Englishman nor Indian in costume, but, like the first speaker, were dressed as Spaniards, each also wearing a handkerchief of bright colour tied round his head and beneath his soft hat, just as if a wound had been received, with a long showy blanket depending from the shoulder, and upon which they now half lay.

There was another present, however, also an anxious watcher of the scene, and that was a well-built youth of about the same age as the girl. For the last five minutes he had been busily cleaning his rifle and oiling the lock; and this task done, he let the weapon rest with its butt upon the rocky earth, its sling-strap hanging loose, and its muzzle lying in his hand as he leaned against a rock and looked sharply from face to face, waiting to hear the result of the conversation.

His appearance was different to that of his companions, for he wore a closely fitting tunic and loose breeches of what at the first glance seemed to be dark tan-coloured velvet, but a second look showed to be very soft, well-prepared deerskin; stout gaiters of a hard leather protected his legs; a belt, looped so as to form a cartridge-holder, and a natty little felt hat, completed his costume....