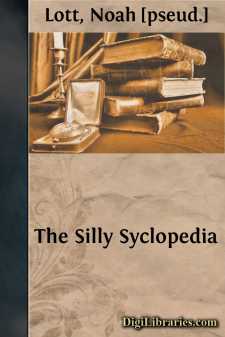 Some eighteen months ago I took this brilliant bunch of brain burrs to my esteemed Publisher and with much enthusiasm invited him to spend a lot of money thereon.

The Main Stem in the Works informed me that he had his fingers on the public pulse and just as soon as that pulse began to jump and yell for something from my fiery pen he would throw the Silly Syclopedia at it.

Then he placed my MS. in the forward turret of his steel-armored safe, gave me a fairly good cigar and began to look hard in the direction of the elevator.

Last week, while searching for some missing government bonds, my Publisher found my sadly neglected MS. He at once reached over and grabbed the public pulse. To his astonishment it was jumping and making signs in my direction.

In a frenzied effort to make up for lost time my publisher then yelled feverishly for a printer.

I think my Publisher should be censured for going out golfing and taking his fingers off the public pulse.

A man can drop a lot of dough trying to pick up money.

A fool and his money are soon spotted.

An accommodation liar soon learns to run like an express.

A guilty conscience needs no accuser if you catch him at it.

An adjective, commonly called the indefinite article because the higher the fewer.

A SHARP. A musical term which cannot be explained here, because the Musical Union might get sore.

A FLAT. A people coop. Seven rooms and a landlord, with hot and cold gas and running servants. A flat is the poor relation of an apartment.

ABROAD. A place where people go to be cured of visiting foreign lands.

ABSCOND. To duck with the dough. From The Latin word absconditto, meaning to grab the long-green and hike for the Bad Lands.

ABSINTHE. The national headache of the French. A jag-builder which is mostly wormwood and bad dreams. A liquid substance which when applied to a "holdover" revivifies it and enables its owner to sit up and notice the bar-tender.

ABSTAIN. The stepladder which leads up to the water wagon.

ABSTEMIOUS. Having an aisle seat on the water wagon.

ACROBAT. A fellow of infinite chest.

ACCUMULATE. To collect or bring together. For example: "He borrowed two dollars from his wife, whereupon he went out and accumulated a bunch of boozerine." (Carlyle's Heroes and Hero Worship.)

A THING OF BEAUTY. A joy forever until we get used to it.

ALCOHOL. The forefather of a hold-over. Boozerine, in the raw state. From the Latin words alco and haul, meaning "he is soused to the booby hatches, haul him to the alcove." (See Lord Macaulay's Jags of Ancient Rome.)

AMBITION. The only disease which laziness can cure.

AMUSEMENT. The hard work a man does on the golf links to give himself an appetite for sausage links.