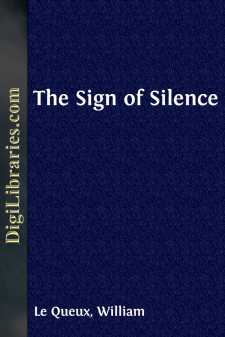 "Then it's an entire mystery?"

"But it's astounding! It really seems so utterly impossible," declared my well-beloved, amazed at what I had just related.

"But there's been nothing about this affair in the papers."

"For certain reasons the authorities are not exactly anxious for any publicity. It is a very puzzling problem, and they do not care to own themselves baffled," I replied.

"Really, it's the most extraordinary story of London life that I've ever heard," Phrida Shand declared, leaning forward in her chair, clasping her small white hands as, with her elbows upon the table-à-deux, she looked at me with her wondrous dark eyes across the bowl of red tulips between us.

We were lunching together at the Berkeley, in Piccadilly, one January day last year, and had just arrived at the dessert.

"The whole thing is quite bewildering, Teddy—an utter enigma," she exclaimed in a low, rather strained voice, her pretty, pointed chin resting upon the back of her hand as she gazed upon me from beneath those long, curved lashes.

"I quite agree," was my answer. "The police are mystified, and so am I. Sir Digby Kemsley is my friend, you know."

"I remember," she said. "You once introduced me—at the opening of the Motor Show at Olympia, I believe. A very brilliant and famous man, isn't he?"

"Rather! A famous engineer. He made the new railway across the Andes, and possesses huge rubber interests in Peru. His name, both in Seina and Valparaiso, is one to conjure with," was my reply; "but——"

"But what?" queried my well-beloved.

"Well, there's one fact which greatly increases the mystery—a fact which is yet to be told."

"What's that?" she asked eagerly.

"Well, I've been making inquiries this morning," I replied with some reluctance, "and I learn to my blank amazement that there is no such person as my friend."

"No such person!" she echoed, staring at me, her lips parted. Being seated in a corner, no one could overhear our conversation. "I don't follow you!"

"Well, Sir Digby died somewhere in South America about a year ago," was my quiet response.

"Apparently so. And yet, if he was, he must have been a man of marvellous cunning and subterfuge," I said. "He was most popular at the club, known at the Ritz and the Savoy, and other places about town."

"He struck me as a man of great refinement—a gentleman, in fact," Phrida said. "I recollect him perfectly: tall, rather thin, with a pointed, grey beard, a long, oval face, and thinnish, grey hair. A very lithe, erect man, whose polite, elegant manner was that of a diplomat, and in whose dark eyes was an expression of constant merriment and good humour. He spoke with a slight accent—Scotch, isn't it?"

"Exactly. You remember him perfectly, dear. A most excellent description," I said; "and that same description has been circulated this morning to every police office throughout the United Kingdom, as well as to the prefectures of police in all the European capitals....