The Shirley Letters from California Mines in 1851-52 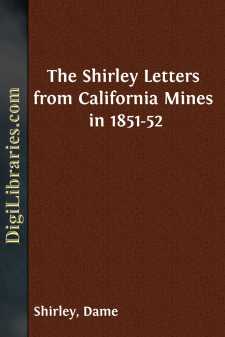 California, by Dr. Josiah Royce, in the handsome as well as handy American Commonwealths series, is commonly regarded as the best short history of California ever written, and particularly so as to the early mining era. Dr. Royce knew his state, and a more competent writer could hardly have been selected. Reviewing, in his history, almost everything accessible, worthy of consideration, in connection with mining-camps, it is noteworthy that the Doctor has much to say concerning the Shirley Letters. Thus (p. 344),—

Fortune has preserved to us from the pen of a very intelligent woman, who writes under an assumed name, a marvelously skillful and undoubtedly truthful history of a mining community during a brief period, first of cheerful prosperity, and then of decay and disorder. The wife of a physician, and herself a well-educated New England woman, "Dame Shirley," as she chooses to call herself, was the right kind of witness to describe for us the social life of a mining camp from actual experience. This she did in the form of letters written on the spot to her own sister, and collected for publication some two or three years later. Once for all, allowing for the artistic defects inevitable in a disconnected series of private letters, these "Shirley" letters form the best account of an early mining camp that is known to me. For our real insight into the mining life as it was, they are, of course, infinitely more helpful to us than the perverse romanticism of a thousand such tales as Mr. Bret Harte's, tales that, as the world knows, were not the result of any personal experience of really primitive conditions.

She is quite unconscious of the far-reaching moral and social significance of much that she describes. Many of the incidents introduced are such as imagination could of itself never suggest, in such an order and connection. There is no mark of any conscious seeking for dramatic effect. The moods that the writer expresses indicate no remote purpose, but are the simple embodiment of the thoughts of a sensitive mind, interested deeply in the wealth of new experiences. The letters are charmingly unsentimental; the style is sometimes a little stiff and provincial, but is on the whole very readable.

No typographical or other changes are made in printing these extracts from Dr. Royce's history, and as typographical style is involved in noticing further the Doctor's review of the Shirley Letters, it is proper to say here that his volume was printed at the Riverside Press, Cambridge, Massachusetts,—a press that, in the words of a writer on matters of typographical style, "maintained the reputation of being one of the three or four most painstaking establishments in the world." Such places are few and far between, unlike the "book and job printing establishments" that, like the poor, are always with us, and where no book was ever printed.

After having so fittingly introduced Shirley to his readers, it is unfortunate that the Doctor is not always accurate in his citation of the facts as printed in the Letters....