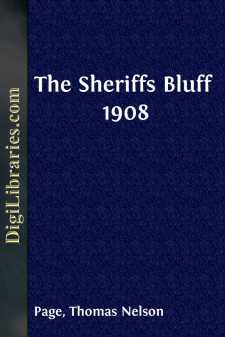 The county of H——— was an old Colonial county, and even as late as the time of my story contained many Colonial relics. Among them were the court-house and the jail, and, at that time, the Judge and the Sheriff.

The court-house was an old brick edifice of solemn and grayish brown, with a portico whose mighty columns might have stood before a temple of Minerva overlooking the Ægean Sea. With its thick walls and massive barred windows, it might have been thought the jail, until one saw the jail. The jail once seen stood alone. A cube of stone, each block huge enough to have come from the Pyramid of Cheops; the windows, or rather the apertures, were small square openings, crossed and recrossed with great bars of wrought iron, so massive that they might have been fashioned on the forge of the Cyclops. Looking through them from the outside, one saw just deep enough into the narrow cavern to see another iron grating, and catch a suspicion of the darkness beyond. The entrance was but a slit letting into a stone-paved corridor on which opened the grinding iron doors of the four small cells, each door a grate of huge iron bars, heavily crossed, with openings just large enough to admit a hand. The jail was built, not to meet the sentimental or any other requirements of a reasonable and humane age, but in that hard time when crime was reckoned crime, when the very names of "gaol" and "prison" stood for something clear and unmistakable.

The Judge of the circuit was himself a relic of the past, for his youth had been cast among those great ones of the earth whose memory had come down coupled with deeds so heroic and far-reaching, that even to the next generation the actors appeared half enveloped and magnified in the halo of tradition. His life had been one of high rectitude and dignity, to which habits of unusual studiousness and a great work on Executors had added a reputation for vast learning, and in his old age both in his manner and his habit he preserved a distance and a dignity of demeanor which lent dignity to the Bar, and surrounded him wherever he went with a feeling akin to awe. Though he had given up the queue and short clothes, he still retained ruffles, or what was so closely akin to them that the difference could scarcely be discerned. Tall, grave, and with a little bend, not in the shoulders but in the neck; with white hair just long enough to be brushed behind in a way to suggest the knot which had once appeared at the back; with calm, quiet eyes under bushy white eyebrows; a face of pinkish red inherited from Saxon ancestors, who once lived in the sun and on the brine, and a mouth and chin which bespoke decision and self-respect in every line and wrinkle, wherever he moved he produced an impression of one who had survived from a preceding age. Moreover, he was a man of heroic ideals, of Spartan simplicity, and of inflexible discipline.

If he had a weakness it was his susceptibility to feminine testimony.

The county was a secluded one—a fitting field for such a judge. And the great meetings of the year were the sessions of the Circuit Court.

The Judge's name was then on every lip, and his passage to the court-house was a procession.

Everyone except those unfortunates who had come under his ban, or might be too far gone in drink to venture into his presence, drew up along the path from the tavern to bow to him and receive his courteous bow in return as he passed with slow and thoughtful step along, preceded by the Sheriff and his deputies, and followed by the Bar and "the multitude."

Whenever he entered the court or rose from the bench the lawyers stood....