The Shepherd of the Hills 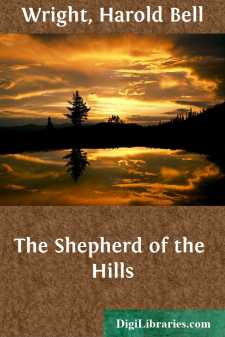 CHAPTER I. THE STRANGER.

IT was corn-planting time, when the stranger followed the Old Trail into the Mutton Hollow neighborhood.

All day a fine rain had fallen steadily, and the mists hung heavy over the valley. The lower hills were wrapped as in a winding sheet; dank and cold. The trees were dripping with moisture. The stranger looked tired and wet.

By his dress, the man was from the world beyond the ridges, and his carefully tailored clothing looked strangely out of place in the mountain wilderness. His form stooped a little in the shoulders, perhaps with weariness, but he carried himself with the unconscious air of one long used to a position of conspicuous power and influence; and, while his well-kept hair and beard were strongly touched with white, the brown, clear lighted eyes, that looked from under their shaggy brows, told of an intellect unclouded by the shadows of many years. It was a face marked deeply by pride; pride of birth, of intellect, of culture; the face of a scholar and poet; but it was more--it was the countenance of one fairly staggering under a burden of disappointment and grief.

As the stranger walked, he looked searchingly into the mists on every hand, and paused frequently as if questioning the proper course. Suddenly he stepped quickly forward. His ear had caught the sharp ring of a horse's shoe on a flint rock somewhere in the mists on the mountain side above. It was Jed Holland coming down the trail with a week's supply of corn meal in a sack across his horse's back.

As the figure of the traveler emerged from the mists, the native checked his horse to greet the newcomer with the customary salutation of the backwoods, "Howdy."

The man returned Jed's greeting cordially, and, resting his satchel on a rock beside the narrow path, added, "I am very glad to meet you. I fear that I am lost."

The voice was marvelously pure, deep, and musical, and, like the brown eyes, betrayed the real strength of the man, denied by his gray hair and bent form. The tones were as different from the high keyed, slurring speech of the backwoods, as the gentleman himself was unlike any man Jed had ever met. The boy looked at the speaker in wide-eyed wonder; he had a queer feeling that he was in the presence of a superior being.

Throwing one thin leg over the old mare's neck, and waving a long arm up the hill and to the left, Jed drawled, "That thar's Dewey Bal'; down yonder's Mutton Holler." Then turning a little to the right and pointing into the mist with the other hand, he continued, "Compton Ridge is over thar. Whar was you tryin' to git to, Mister?"

"Where am I trying to get to?" As the man repeated Jed's question, he drew his hand wearily across his brow; "I--I--it doesn't much matter, boy. I suppose I must find some place where I can stay to-night. Do you live near here?"

"Nope," Jed answered, "Hit's a right smart piece to whar I live. This here's grindin' day, an' I've been t' mill over on Fall Creek; the Matthews mill hit is. Hit'll be plumb dark 'gin I git home....