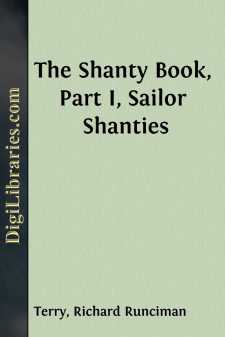 IT may reasonably be asked by what authority a mere landsman publishes a book on a nautical subject. I may, therefore, plead in extenuation that I have all my life been closely connected with seafaring matters, especially during childhood and youth, and have literally 'grown up with' shanties. My maternal ancestors followed the sea as far back as the family history can be traced, and sailor uncles and grand-uncles have sung shanties to me from my childhood upwards. During boyhood I was constantly about amongst ships, and had learnt at first hand all the popular shanties before any collection of them appeared in print. I have in later years collected them from all manner of sailors, chiefly at Northumbrian sources. I have collated these later versions with those which I learnt at first hand as a boy from sailor relatives, and also aboard ship. And lastly, I lived for some years in the West Indies, one of the few remaining spots where shanties may still be heard, where my chief recreation was cruising round the islands in my little ketch. In addition to hearing them in West Indian seaports, aboard Yankee sailing ships and sugar droghers, I also heard them sung constantly on shore in Antigua under rather curious conditions. West Indian negro shanties are movable wooden huts, and when a family wishes to change its venue it does so in the following manner: The shanty is levered up on to a low platform on wheels, to which two very long ropes are attached. The ropes are manned by as many hands as their length will admit. A 'shantyman' mounts the roof of the hut and sits astride it. He sings a song which has a chorus, and is an exact musical parallel of a seaman's 'pull-and-haul' shanty. The crowd below sings the chorus, giving a pull on the rope at the required points in the music, just as sailors did when hauling at sea. Each pull on the rope draws the hut a short distance forward, and the process is continued till its final resting-place is reached, when the shantyman descends from the roof. The hut is then levered off the platform on to terra firma and fixed in its required position.

WHAT A SHANTY IS

Shanties were labour songs sung by sailors of the merchant service only while at work, and never by way of recreation. Moreover—at least, in the nineteenth century—they were never used aboard men-o'-war, where all orders were carried out in silence to the pipe of the bo'sun's whistle.

Before the days of factories and machinery, all forms of work were literally manual labour, and all the world over the labourer, obeying a primitive instinct, sang at his toil: the harvester with his sickle, the weaver at the loom, the spinner at the wheel. Long after machinery had driven the labour-song from the land it survived at sea in the form of shanties, since all work aboard a sailing vessel was performed by hand.

The advent of screw steamers sounded the death-knell of the shanty. Aboard the steamer there were practically no sails to be manipulated; the donkey-engine and steam winch supplanted the hand-worked windlass and capstan....