The Sexual Question A Scientific, psychological, hygienic and sociological study 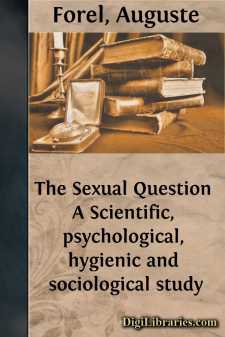 THE REPRODUCTION OF LIVING BEINGS

A general law of organic life decrees that every living individual is gradually transformed in the course of a cycle which is called individual life, and which terminates with death, that is by the destruction of the greater part of the organism. It then becomes inert matter, and the germinative cells alone of all its parts continue its life under certain conditions.

The Cells: Protoplasm. The Nucleus.—Since the time of Schwann (1830) it is agreed that the cell is the most simple morphological element which is capable of living. Among the lower organisms this element constitutes the entire individual. There is no doubt that the cell is already a thing of high organization. It is formed of infinitely small elements of very different value and chemical constitution, which form what is called protoplasm or the cell-substance. But these infinitely small elements are so far absolutely unknown. It is in them that must be sought the change from inanimate matter, that is the chemical molecule, to living matter, a change which was formerly believed to lie in the protoplasm itself, before its complicated structure was known. We need not concern ourselves here with this question which remains an open one.

Life being established, the cell remains its only known constant element. The cell is composed of protoplasm which contains a rounded nucleus formed of nucleo-plasma. The nucleus is the most important part of the cell, and governs its life.

Cell-division.—The lowest unicellular organisms, as each cell of a multicellular organism, reproduce themselves by division or fission. Each cell originates from another cell in the following manner: the cell divides in the center as well as its nucleus, and in this way forms two cells which grow by absorbing by endosmosis (filtration) the nutritive juices which surround them. Death or destruction of the cell is therefore death of the entire organism when this is unicellular. But it has been previously reproduced.

We find here already the special and fundamental act of conjugation, that is the fusion of two cells into one, which serves to strengthen reproduction. This act, common to all living things including man, shows us that continuation of life is only possible when from time to time different elements, that is elements which have been exposed to different influences, combine together. If this conjugation is prevented and life is allowed to continue indefinitely by means of fission or by budding (vide infra), there results a progressive weakening and degeneration which leads to the disappearance of the whole group thus reproduced.

It is necessary to explain here the results of recent scientific work on the intimate phenomena of cell-division, for they are closely allied to those of fecundation.

The nucleus of an ordinary cell presents itself in the form of a nearly spherical vesicle....