The Sexual Life of the Child 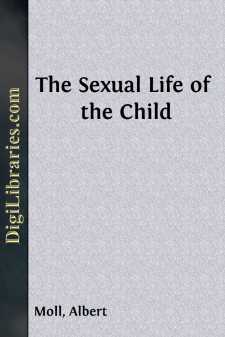 Dr. Moll is a gifted physician of long experience whose work with those problems of medicine and hygiene which demand scientific acquaintance with human nature has made him well known to experts in these fields. In this book he has undertaken to describe the origin and development, in childhood and youth, of the acts and feelings due to sex; to explain the forces by which sex-responses are directed and misdirected; and to judge the wisdom of existing and proposed methods of preventing the degradation of a child's sexual life.

This difficult task is carried out, as it should be, with dignity and frankness. In spite of the best intentions, a scientific book on sex-psychology is likely to appear, at least in spots, to gratify a low curiosity; but in Dr. Moll's book there is no such taint. Popular books on sex-hygiene, on the other hand, are likely to suffer from a pardonable but harmful delicacy whereby the facts of anatomy, physiology, and psychology which are necessary to make their principles comprehensible and useful, are omitted, veiled, or even distorted. Dr. Moll honors his readers by a frankness which may seem brutal to some of them. It is necessary.

With dignity and frankness Dr. Moll combines notable good sense. In the case of any exciting movement in advance of traditional custom, the forerunners are likely to combine a certain one-sidedness and lack of balance with their really valuable progressive ideas. The greater sagacity and critical power are more often found amongst the men of science who avoid public discussion of exciting social or moral reforms, and are suspicious of startling and revolutionary doctrines or practices. It is therefore fortunate that a book on the sexual life during childhood should have been written by a man of critical, matter-of-fact mind, of long experience as a medical specialist, and of wide scholarship, who has no private interest in any exciting psychological doctrine or educational panacea.

The translation of this book will be welcomed by men and women from many different professions, but alike in the need of preparation to guide the sex-life of boys and girls and to meet emergencies caused by its corruption by weakness within or attack from without. Of the clergymen in this country who are in real touch with the lives of their charges, there is hardly a one who does not, every so often, have to minister to a mind whose moral and religious distress depends on an unfortunate sex history. Conscientious and observant teachers realize, in a dim way, that they cannot do justice to even the purely intellectual needs of pupils without understanding the natural history of those instinctive impulses, which, concealed and falsified as they are under our traditional taboos, nevertheless retain enormous potency. The facts, so clearly shown in the present volume, that the life of sex begins long before its obvious manifestations at puberty, and that the direction of its vaguer and less differentiated habits in these earlier years is as important as its hygiene at the more noticeable climax of the early 'teens, increase the teacher's responsibility....