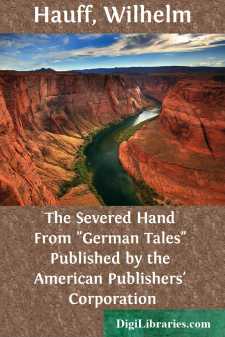 I was born in Constantinople; my father was a dragoman at the Porte, and besides, carried on a fairly lucrative business in sweet-scented perfumes and silk goods. He gave me a good education; he partly instructed me himself, and also had me instructed by one of our priests. He at first intended me to succeed him in business one day, but as I showed greater aptitude than he had expected, he destined me, on the advice of his friends, to be a doctor; for if a doctor has learned a little more than the ordinary charlatan, he can make his fortune in Constantinople. Many Franks frequented our house, and one of them persuaded my father to allow me to travel to his native land to the city of Paris, where such things could be best acquired and free of charge. He wished, however, to take me with himself gratuitously on his journey home. My father, who had also travelled in his youth, agreed, and the Frank told me to hold myself in readiness three months hence. I was beside myself with joy at the idea of seeing foreign countries, and eagerly awaited the moment when we should embark. The Frank had at last concluded his business and prepared himself for the journey. On the evening before our departure my father led me into his little bedroom. There I saw splendid dresses and arms lying on the table. My looks were however chiefly attracted to an immense heap of gold, for I had never before seen so much collected together.

My father embraced me and said: "Behold, my son, I have procured for thee clothes for the journey. These weapons are thine; they are the same which thy grandfather hung around me when I went abroad. I know that thou canst use them aright; but only make use of them when thou art attacked; on such occasions, how-over, defend thyself bravely. My property is not large; behold I have divided it into three parts, one part for thee, another for my support and spare money, but the third is to me a sacred and untouched property, it is for thee in the hour of need." Thus spoke my old father, tears standing in his eyes, perhaps from some foreboding, for I never saw him again.

The journey passed off very well; we had soon reached the land of the Franks, and six days later we arrived in the large city of Paris. There my Frankish friend hired a room for me, and advised me to spend wisely my money, which amounted in all to two thousand dollars. I lived three years in this city, and learned what is necessary for a skilful doctor to know. I should not, however, be stating the truth if I said that I liked being there, for the customs of this nation displeased me; besides, I had only a few chosen friends there, and these were noble young men.

The longing after home at last possessed me mightily; during the whole of that time I had not heard anything from my father, and I therefore seized a favorable opportunity of reaching home. An embassy from France left for Turkey. I acted as surgeon to the suite of the Ambassador and arrived happily in Stamboul. My father's house was locked, and the neighbors, who were surprised on seeing me, told me my father had died two months ago. The priest who had instructed me in my youth brought me the key; alone and desolate I entered the empty house. All was still in the same position as my father had left it, only the gold which I was to inherit was gone. I questioned the priest about it, and he, bowing, said: "Your father died a saint, for he has bequeathed his gold to the Church." This was and remained inexplicable to me. However, what could I do? I had no witness against the priest, and had to be glad that he had not considered the house and the goods of my father as a bequest. This was the first misfortune that I encountered. Henceforth nothing but ill-luck attended me. My reputation as doctor would not spread at all, because I was ashamed to act the charlatan; and I felt everywhere the want of the recommendation of my father, who would have introduced me to the richest and most distinguished, but who now no longer thought of the poor Zaleukos! The goods of my father also had no sale, for his customers had deserted him after his death, and new ones are only to be got slowly.

Thus when I was one day meditating sadly over my position, it occurred to me that I had often seen in France men of my nation travelling through the country exhibiting their goods in the markets of the towns. I remembered that the people liked to buy of them, because they came from abroad, and that such a business would be most lucrative....