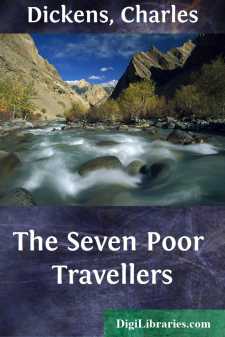 Strictly speaking, there were only six Poor Travellers; but, being a Traveller myself, though an idle one, and being withal as poor as I hope to be, I brought the number up to seven.  This word of explanation is due at once, for what says the inscription over the quaint old door?

It was in the ancient little city of Rochester in Kent, of all the good days in the year upon a Christmas-eve, that I stood reading this inscription over the quaint old door in question.  I had been wandering about the neighbouring Cathedral, and had seen the tomb of Richard Watts, with the effigy of worthy Master Richard starting out of it like a ship’s figure-head; and I had felt that I could do no less, as I gave the Verger his fee, than inquire the way to Watts’s Charity.  The way being very short and very plain, I had come prosperously to the inscription and the quaint old door.

“Now,” said I to myself, as I looked at the knocker, “I know I am not a Proctor; I wonder whether I am a Rogue!”

Upon the whole, though Conscience reproduced two or three pretty faces which might have had smaller attraction for a moral Goliath than they had had for me, who am but a Tom Thumb in that way, I came to the conclusion that I was not a Rogue.  So, beginning to regard the establishment as in some sort my property, bequeathed to me and divers co-legatees, share and share alike, by the Worshipful Master Richard Watts, I stepped backward into the road to survey my inheritance.

I found it to be a clean white house, of a staid and venerable air, with the quaint old door already three times mentioned (an arched door), choice little long low lattice-windows, and a roof of three gables.  The silent High Street of Rochester is full of gables, with old beams and timbers carved into strange faces.  It is oddly garnished with a queer old clock that projects over the pavement out of a grave red-brick building, as if Time carried on business there, and hung out his sign.  Sooth to say, he did an active stroke of work in Rochester, in the old days of the Romans, and the Saxons, and the Normans; and down to the times of King John, when the rugged castle—I will not undertake to say how many hundreds of years old then—was abandoned to the centuries of weather which have so defaced the dark apertures in its walls, that the ruin looks as if the rooks and daws had pecked its eyes out.

I was very well pleased, both with my property and its situation.  While I was yet surveying it with growing content, I espied, at one of the upper lattices which stood open, a decent body, of a wholesome matronly appearance, whose eyes I caught inquiringly addressed to mine.  They said so plainly, “Do you wish to see the house?” that I answered aloud, “Yes, if you please.”  And within a minute the old door opened, and I bent my head, and went down two steps into the entry....