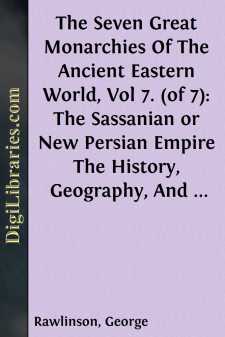 Condition of the Persians under the Successors of Alexander—under the Arsacidce. Favor shown them by the latter—allowed to have Kings of their own. Their Religion at first held in honor. Power of their Priests. Gradual Change of Policy on the part of the Parthian Monarchs, and final Oppression of the Magi. Causes which produced the Insurrection of Artaxerxes.

"The Parthians had been barbarians; they had ruled over a nation far more civilized than themselves, and had oppressed them and their religion."

When the great Empire of the Persians, founded by Cyrus, collapsed under the attack of Alexander the Great, the dominant race of Western Asia did not feel itself at the first reduced to an intolerable condition. It was the benevolent design of Alexander to fuse into one the two leading peoples of Europe and Asia, and to establish himself at the head of a Perso-Hellenic State, the capital of which was to have been Babylon. Had this idea been carried out, the Persians would, it is evident, have lost but little by their subjugation. Placed on a par with the Greeks, united with them in marriage bonds, and equally favored by their common ruler, they could scarcely have uttered a murmur, or have been seriously discontented with their position. But when the successors of the great Macedonian, unable to rise to the height of his grand conception, took lower ground, and, giving up the idea of a fusion, fell back upon the ordinary status, and proceeded to enact the ordinary role, of conquerors, the feelings of the late lords of Asia, the countrymen of Cyrus and Darius, must have undergone a complete change. It had been the intention of Alexander to conciliate and elevate the leading Asiatics by uniting them with the Macedonians and the Greeks, by promoting social intercourse between the two classes of his subjects and encouraging them to intermarry, by opening his court to Asiatics, by educating then in Greek ideas and in Greek schools, by promoting them to high employments, and making them feel that they were as much valued and as well cared for as the people of the conquering race: it was the plan of the Seleucidae to govern wholly by means of European officials, Greek or Macedonian, and to regard and treat the entire mass of their Asiatic subjects as mere slaves. Alexander had placed Persian satraps over most of the provinces, attaching to them Greek or Macedonian commandants as checks. Seloucus divided his empire into seventy-two satrapies; but among his satraps not one was an Asiatic—all were either Macedonians or Greeks. Asiatics, indeed, formed the bulk of his standing army, and so far were admitted to employment; they might also, no doubt, be tax-gatherers, couriers, scribes, constables, and officials of that mean stamp; but they were as carefully excluded from all honorable and lucrative offices as the natives of Hindustan under the rule of the East India Company. The standing army of the Seleucidae was wholly officered, just as was that of our own Sepoys, by Europeans; Europeans thronged the court, and filled every important post under the government....